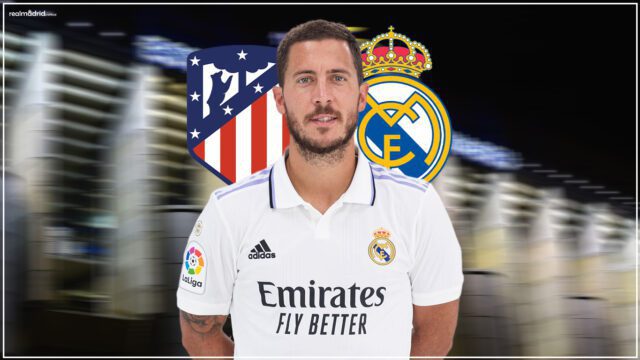 With the spearhead of Real Madrid’s attack, Karim Benzema getting sidelined for a couple of weeks following a muscular injury and having made no signings for a backup striker in the summer transfer window, the responsibility to lead our frontline falls on the shoulders of former Chelsea man – Eden Hazard.

Having made 4 appearances and adding 1 goal and 1 assist to his tally and not having picked up an injury so far this season, he looks to prove himself and play a major role in the first team, more so with Karim Benzema injured, but is it enough to make an impact against Atletico Madrid?

Hazard showed his prowess against Celta dropping behind the back-line and creating wide spaces for Vinicius and Valverde, as well as staying up front at times acting as a target man.

But against Mallorca where they played a mid-block with a 5 man back-line with the likes of Raillo and Jaime Costa cutting off wide lanes forcing the play to be vertical and direct, he couldn’t show much of his prowess.

Change in style of play over recent years

Eden’s style of play has suffered quite a lot of changes since the time he came to Madrid in 2018. From picking the ball and running circles around defenders back in his Chelsea days, his confidence and flair took a huge blow following months after months of staying out of the squad following injuries, as well as irregularities causing to remain physically unfit for most of the times.

Hazard’s penetration abilities with the ball or without have deteriorated quite a lot. He still makes play more fluid with his switches, dummy runs, and dropping back as a false-nine under Ancelotti but isn’t quite as impactful as he was a left winger.

Despite having conceded a 2-0 defeat from Leverkusen in the Champions League this week, the Rojiblancos have kept up to their reputation of intensive and aggressive defence in La Liga this season with a 5 man back-line along with the partnership of Mario Hermoso and new signing, Axel Witsel.

Simeone has also shown his trust in their bright prospect Reinildo Mandava, who has been great as well. Even if Simeone makes a few tactical switches and plays in Felipe, one thing is clear – Atleti would try to not allow an ounce of space for creative play.

Choices to make for Ancelotti

Another name that comes quite often these days is Rodrygo Goes. The young Brazilian has shown quite a lot considering the small windows of display Ancelotti has given him so far.

With the restless urge to dribble as well as having a keen eye for passes, Rodrygo has delivered almost always when Carlo has called for him.

Against Mallorca as well, when Hazard and Rodrygo made switches, Rodrygo looked to penetrate into the defence and create big chances more than the former.

It would be interesting to see if Ancelotti uses Karim’s injury to help Rodrygo develop more confidence and connection with the team or if would he trust Hazard to be the man to help make difference against Simeone’s men.