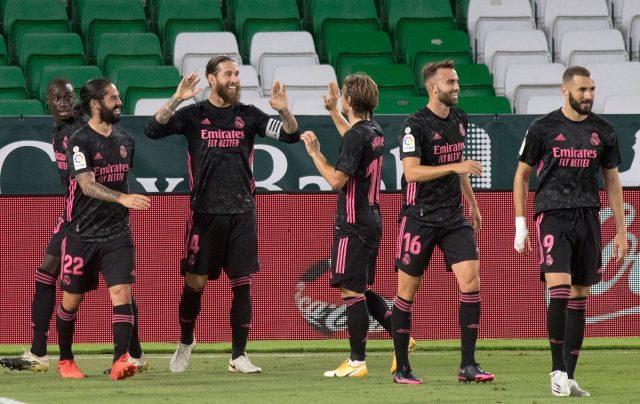 Real Madrid capped their second league appearance with a win over Real Betis at the Benito Villamarin Stadium.

The 2019/20 La Liga champions started the game brightly against Manuel Pellegrini’s side who had won their previous two game in the top-flight.

Federico Valverde opened the scoring for Zinedine Zidane’s side in the 14th minute after following a brilliant show of charisma by Karim Benzema.

However, Madrid could not cope with the pressure from Betis in the 15 minutes of the first half with double quick fire goals from Aissa Mandi and William Carvalho within two minutes to get the hosts in the leading heading into the break.

Zidane was forced into an early substitution with Toni Kroos coming off for Luka Modric after what seemed to be a knock picked up. Isco also came on for Martin Odegaard during the break.

An own goal from Emerson got Madrid levelled shortly after the recess and the Betis defender was shown the matching off orders for a tactical foul on Luka Jovic, who was through on goal and was one on one with the opposition’s goalkeeper.

The send off gave Zidane’s men the upper hand, throwing bodies forward in search of a third goal, introducing Borja Mayoral into the game as well.

Embed from Getty ImagesThe 23-year-old made an immediate impact with his introduction into the game as his initial movement into the penalty area led to his side winning a penalty after Marc Bartra manhandled the ball in his box.

Sergio Ramos stepped up to convert from the spot restoring his side’s lead as they recorded their first three points of the 2020/21 campaign.

It may have carried controversies, but Zidane’s side needed the win after playing out a dull 0-0 game against Real Sociedad in their opening game.