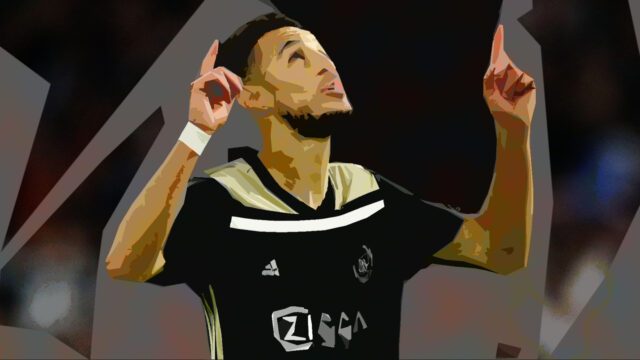 Highly-rated left-back, Noussair Mazraoui has been very impressive since the commencement of the 2021/22 season in Europe.

The Ajax full-back has been highly recognized by top teams across Europe, with some clubs looking forward to tying him down with a move away from the Dutch league.

It is known, that the player’s current contract would expire at the end of the season, enabling him to be free transfer in the summer.

The Moroccan international has been engaged in 22 matches across all competitions this season of which he has scored 5 times and assisted  2 times so far in the campaign.

Bayern Munich has also shown interest in the highly-rated Right full back. The Bavarian club has been monitoring various full-backs in the past few months, but Ajax’s Noussair Mazraoui does seem to be the top target in this position.

As per a report by Martinez today in Sport, Real Madrid attempted to sign Ajax right-back Noussair Mazraoui, yet after making their endeavour, have discovered that the Moroccan has previously consented to terms with Barcelona. This was a surprise to Real Madrid.

Real Madrid are searching for safety at the right-back position. It’s been generally announced that the club is content with the Carvajal – Vazquez couple while Alvaro Odriozola is also an option to come in the summer.

Per reports, it could be that Carvajal’s new exhibitions versus PSG, Barcelona, is maybe a true indication that Carvajal may just have past his best times as a fullback.

Mazraoui would have been a decent replacement should Madrid have managed to sign him ahead of the Barca links but the club will now have to look elsewhere and there are lots of players who could come into the picture.

MUST READ: Is Antonio Rudiger a necessity for Real Madrid?

Mohammed Kudus to Real Madrid? Is he worth a try?