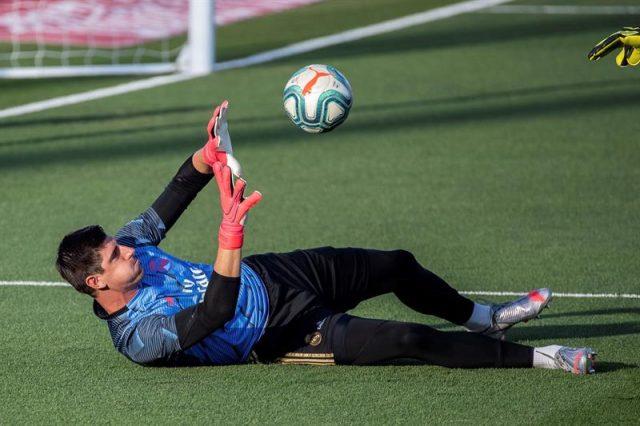 Real Madrid manager Zinedine Zidane is once again expected to be without some key players for this weekend’s La Liga clash with Cadiz at the Alfredo Di Stefano Stadium.

Though some were allowed to join their countries for  the international break in the last week, others who remained at the club have been through some training sessions with the manager overseeing his third session on Wednesday.

For some youth players including Theo Zidane and Pipi, the absent of several first team members due to the international break was a good chance for them to train with the remaining squad.

Wednesday’s session also saw goalkeeper Thibaut Courtois return to the field for the first time after returning from the Belgium camp having suffered a minor injury.

The shot-stopper is expected to be available for the clash after he seem to have recovered from the injury he picked up, calming a bit nerves at the club.

Vinicius Junir, who also missed training due to cold looks to be fine and should be available to face Alvaro Cervera’s side on Saturday.

However, the likes of Eden Hazard, Dani Carvajal, Eder Militao, Mariano Diaz and Alvaro Odriozola are still some long way off getting 100% fit for the weekend clash.

Hazard is yet to feature for Los Blancos this season and despite attempts to impress in his second season at the club, injuries continue to hamper his progress.

Both Carvajal and Odriozola are also looking to recover in time for the clash against El Clasico as they look certain to miss the next two games.

Militao’s absence also means that Zidane is left with a bit of worry at the back with Marcelo and Nacho Fernandez the only back ups left in that department.

Mariano’s case isn’t too much of concern considering that the manager has Luka Jovic to count on should Karim Benzema need to come off at some point on Saturday.