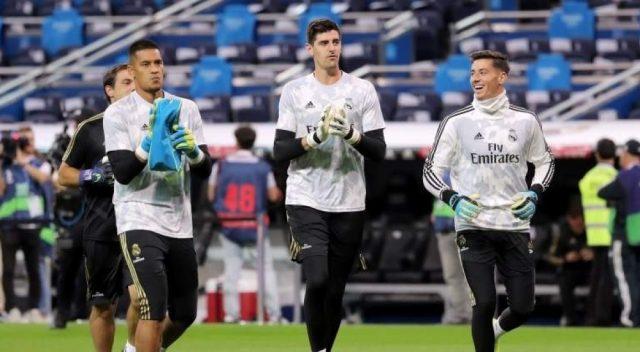 It has been over two weeks since the Spanish La Liga ended, with Real Madrid being declared champions of the division for the 34th time in their history.

Ahead of their return to football in the Champions League, we at Real Madrid Unofficial take a look at how goalkeepers fared during the league campaign.

Belgium international Thibaut Courtois was the undisputed starter in post for Zinedine Zidane’s side through the majority of the campaign despite a scare at the earlier stages.

Courtois played 34 out of the 38 games available for Madrid keeping 18 clean sheets which saw him end up win the Zamora trophy for the first time since previously winning two with Atletico Madrid.

He has averaged an impressive 2.2 saves per game in the league, that is 79 percent of shots faced in a game while conceding 0.6 goals per game in the top-flight. His best performances came in the game away to Espanyol where Los Blancos won by a goal to nil, record a match rating of 8.2 in that fixture.

Looking at his performances, the first-choice goalkeeper gets an overall rating of 9 from us.

Alphonse Areola joined the Spanish club on loan from Paris Saint-Germain as part of the deal which took Keylor Navas in the opposite direction last summer.

Areola had quite a number of games to stay in pole for Madrid but only managed four league appearances in the 2019/20 season.

Osasuna, Granada, Deportivo Alaves and Leganes were the four teams he played against keeping a clean sheet against Los Rojillos.

The France international was quite a good back up for Courtois and despite his lack of game opportunities, he delivered some good performances when called upon.

He gets a rating of 6 from us.

Diego Altube was brought in as the third goalkeeper after the departures of Luca Zidane and Andriy Lunin on loan. But the 20-year-old had no opportunity to play despite making the matchday squad on numerous occasions.