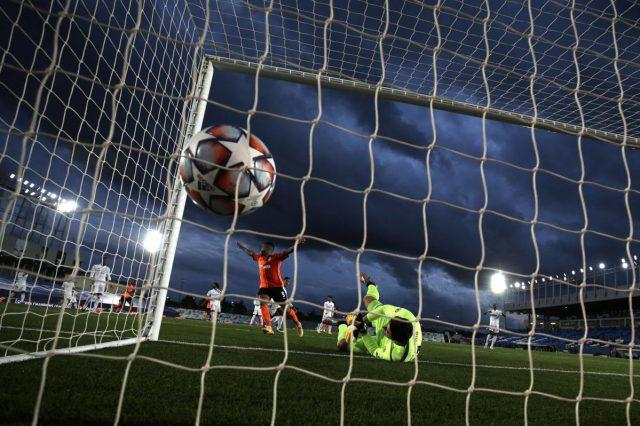 Real Madrid suffered yet another defeat on Wednesday, after being beaten by Shakhtar Donetsk at the Alfredo Di Stefano Stadium.

The game against the Ukrainian opponents was Madrid’s first game in the 2020/21 UEFA Champions League campaign but Zinedine Zidane’s men couldn’t make the most of their chances.

Los Blancos were looking to put behind them a disappointing result over the weekend following their shock defeat to Cadiz at home in the Spanish La Liga.

Thibaut Courtois picked up the ball three times from his net during the first 45 minutes of the game with Raphael Varane’s own goal coming in between Tete and Manor Solomon’s goals as the Spanish side went into the break three nil down.

Zidane made a substitution at half time with Karim Benzema coming in for Rodrygo Goes and that seem to have had a good effect with Luka Modric pulling one back immediately for the home side.

Vinicius Junior also added a pulled another for Madrid just 15 seconds after coming on, as he grabbed his third goal of the 2020/21 campaign.

Madrid continued to pressure for the equaliser but were restricted many times by Luis Castro’s side who had some key players missing due to testing positive for coronavirus.

At the last end of the game, Madrid looked certain to have grabbed a goal to end the game 3-3 after Federico Valverde fired straight from a Toni Kroos pass in the dying embers of the game.

However, the Uruguay international’s goal was ruled out after checks by the VAR, with Vinicius said to has interfered with play while in an offside position.

Zidane would have a lot of thinking to for with the Clasico clash against Barcelona coming up on Saturday and he wouldn’t like to lose three times in a row.