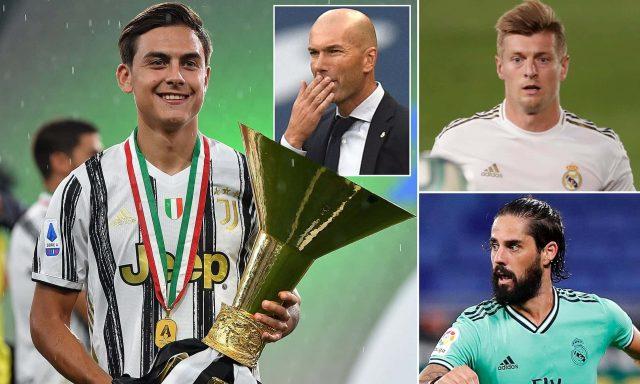 Real Madrid are reportedly weighing up an offer for Juventus forward Paulo Dybala this summer.

The Argentina international has been identified as a transfer target for Los Blancos who could reconsider their decision not to buy in the summer.

Madrid exited the Champions League on Friday after losing to Manchester City at the Etihad Stadium. And despite already winning the Spanish La Liga, Zinedine Zidane’s side put up a poor display against the Premier League side.

They are said to be considering adding Isco or Toni Kroos to a deal which could see the Argentine end up at the Santiago Bernabeu next season.

The 26-year-old was named the best player in the Italian league during the 2019/20 campaign, where he scored 11 goals and also provided six assists in 33 appearances for the Serie A champions.

Dybala was linked with a move away from the Allianz Stadium last summer after reports suggested former Juventus boss Maurizio Sarri was not ready to count on his.

However, the former Palermo star ended up staying with the club, while Sarri faced the sack after failing to guide the club into the last eight of the Champions League following the exit on away goal rule to Olympique Lyon on Friday.

Isco has not been given much opportunities by Zidane, who prefers a midfield trio of Luca Modric, Casemiro and Kroos. The Spaniard started just 15 La Liga games all season, finding the back of the net just once while also adding two assists.

Kroos has said on many occasions he feels comfortable at the Spanish capital and is not considering any move away from the Bernabeu.

With the Germany international a huge part of Madrid’s success in the last few years, Isco looks more likely to be used with new Juventus boss Andrea Pirlo said to be a huge fan of the 28-year-old.