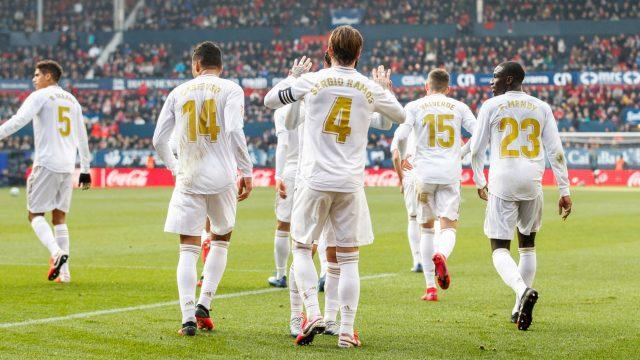 Just as we started in the last few days with the review of the performances of the Real Madrid players, we take a look at how the defenders also played a role in the league as Los Blancos enjoyed La Liga success.

An undisputed started in the right-back position for Madrid, Carvajal played all but seven of the club’s games in the Spanish top-flight. A goal against Deportivo Alaves was all he needed but also added five assists to his name.

The 28-year-old also had a role to play in 16 of the total 19 clean sheets the team recorded.

The 24-year-old started the season as a back up to Carvajal playing four games. However his poor games against Real Mallorca where he suffered a sending off was his last action in the league before leaving on loan to Bayern Munich.

A reliable figure at the back for Zinedine Zidane’s team, Raphael Varane was just a better version of himself during the 2019/20 league campaign.

The 27-year-old scored twice and also provided one assist from the centre-back position, while also helping with 15 clean sheets.

Any reason not label him as the best defender in the division this season? Sergio Ramos was solid for the team and also popped up with attacking returns at some point of the season.

The Spain international missed only three games and scored 11 goals in the just ended campaign – averaging a goal every 274 minutes.

Eder Militao was given 15 games to play in the league in his debut season, having arrived last summer. The player started 10 games and kept four clean sheets during that time.

He was a good cover for any of the centre-backs and his best performances was in the 1-0 win over Athletic Bilbao at San Mames.

Nacho was injured for most part of the season but still managed six appearances in La Liga with four of them being starts. He scored one goal and contributed to three clean sheets.

One of the brightest addition to the side in the same, Ferland Mendy displaced Marcelo as the first choice left-back for Zidane. He managed 19 starts and six substitute appearances helping his side to keep 12 clean sheets.

Going forward, Mendy didn’t have the same attacking threat as the Brazilian but could only manage a goal and two assists.

Just like Mendy, Marcelo also scored one goal and provided two assists, doing his in just 15 league appearances. He also averaged 1.2 interceptions per game in the league while recording four clean sheets.

Marcelo ended the campaign with a hamstring injury with his last game coming at against Bilbao.