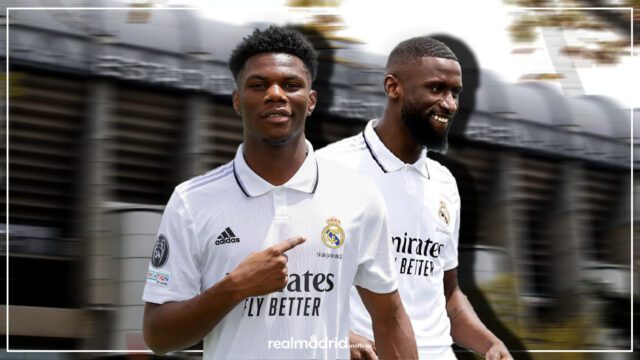 This year’s summer transfer window has been very interesting and lively as a lot of clubs across Europe have made some major signings to reinforce their squad.

Real Madrid hasn’t been that busy in the market after failing to secure the signing of French sensation Kylian Mbappe. The club however has made some new additions to the squad to help bolster the team in the domestic league and Champions League title defence for the upcoming season.

Recent additions to the club are signing Antonio Rudiger on a free transfer deal from Chelsea and highly-rated midfielder Aurelian Tchouameni who spent two and half seasons at Monaco. The Frenchman has penned a six-year deal contract at the Bernabeu with the Los Blancos.

Madrid are eager to start the season well and prevent pressure from their arch-rivals FC Barcelona who have made some key signings to improve their squad.

We will take a look at how can Real Madrid lineup with two new signings Aurelian Tchouameni & Antonio Rudiger:

Carlo Ancelotti could have a real headache in the upcoming season as to how he will parade his starting eleven, especially in midfield when the semi starts as he has many options at his disposal. But the veteran gaffer with more experience will get a to get the best out of his players on match days.

In goalkeeping, Thibaut Courtois is expected to continue as the undisputed and in no competition to be the number 1 goalkeeper for the season ahead. He provided some good saves and performances last season to help Real Madrid win the domestic league and UCL – one of those good performances was in the second leg against Chelsea in the UEFA Champions League quarter-finals and in the UCL finals against Liverpool.

Eder Militao and Rudiger are expected to form a rock-solid centre-back pairing with Dani Carvajal and David Alaba occupying the full-back positions.

Also, a centre-back pairing of Rudiger and Alaba is not ruled out yet. That will see Ferland Mendy filling the left back spot and Carvajal playing from the right side of the defence.

Real Madrid’s key strength in the set-up has mostly been their midfield with players like Luka Modric, Toni Kroos, Federico Valverde and Carlos Casemiro providing excellent performance over the years.

It is known that Modric and Kroos are ageing so managing their game time will be very important to keep them match-fit for big games.

Tchouameni is not expected to be a regular starter as his natural and favourite position which is the defensive midfield role is currently occupied by Casemiro but things could change depending on his performance to get a starting role at the club.

He’s adapted to play a box-to-box midfielder role and is expected to play alongside Casemiro and Kroos in games to give more rest to Modric.

Players like Valverde and Camavinga will be used as substitutes and during rotations to give other midfielders rest.

In a case where Madrid plays a four-man midfield, Valverde is expected to be the fourth midfielder on the pitch.

In attack, Karim Benzema will lead the line and will be partnered with Vinicius Junior and either Rodrygo Goes, Marco Asensio or Eden Hazard.