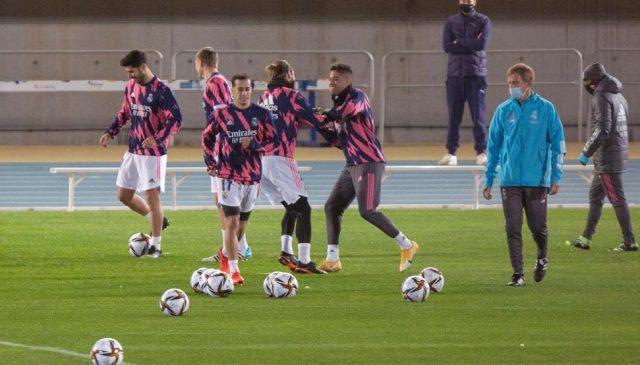 11 times Spanish Super Cup winners Real Madrid will be eyeing the trophy once again when they take on Athletic Bilbao in the semi-final in midweek.

Zinedine Zidane’s men are looking to win the competition back-to-back and their journey will start against Marcelino’s side on Thursday night.

Zidane has three injury concerns ahead of the game with Rodrygo Goes, Dani Carvajal and Luka Jovic all sidelined and confirmed to miss the game. Aside that, all players are available for selection against Bilbao.

Here we look at how Madrid could lineup against the Basque club in the semi-final:

Despite calls for Andriy Lunin to be handed playing minutes in the cup matches, Thibaut Courtois is likely to main his spot in goal for the Los Blancos. The Belgium international was in goal for two games last season as Madrid clinched the trophy and same is expected this season.

With Dani Carvajal said to be out of the clash, Lucas Vazquez is likely to be handed the right-back position on Thursday with Ferland Mendy taking up the left-back role as usual.
Raphael Varane and Sergio Ramos could also continue their partnership at the heart of defence for Madrid.

With their continuous game time, none of three seem to be resting anytime soon and against Marcelino’s men, the intelligence, press and physicality of Toni Kroos, Luka Modric and Casemiro will all be needed to triumph over Bilbao.

Marco Asensio in his recent is guaranteed a start together with Karim Benzema. However, Eden Hazard needs continuity and that is exactly what Zidane will do with the Belgium international. The same attacking line was blunt against Osasuna last weekend but fireworks are expected on Thursday.