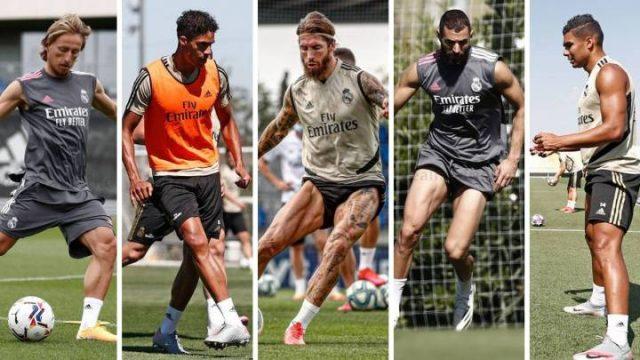 Real Madrid will host Cadiz in their league game on Saturday evening at the Alfredo Di Stefano Stadium after the international break.

Madrid are considered favourites for the encounter due to their superiority over Alvaro Cervera’s side in their previous games played.

And here, we take a look at how Zinedine Zidane’s side could lineup against the ninth placed team at the moment in the Spanish top-flight.

Despite suffering a minor injury on international duty which saw him return early to the Spanish capital, Thibaut Courtois is expected to recover in time for the clash against Cadiz. The Madrid keeper has kept three clean sheets in four games this season.

Nacho Fernandez could be set for another opportunity at right-back with Dani Carvajal and Alvaro Odriozola still out with respective injuries. The Spaniard was a bit shaky in his last game against Levante.

Raphael Varane and Sergio Ramos who both featured for their respective countries are also expected to back in the starting lineup on Saturday.

With Ferland Mendy becoming inactive while on international duty, veteran left-back Marcelo could be handed a start could be handed his second league start of the 2020/21 campaign.

The famous trio of Luka Modric, Casemiro and Toni Kroos could all be available for selection over the weekend after the latter recovered from an injury which kept him out of Madrid’s last two games before the break.

Kroos played in Germany’s fixtures against Ukraine and Switzerland in the UEFA Nations League and should walk back into Zidane’s set up against Cadiz.

Marco Asensio after gradually regaining his fitness will also be expected to start from the scratch on Saturday alongside Karim Benzema and Vinicius Junior.

The three players have a total of three goals combined in the league this season and will be looking to add to their tally against Cervera’s men.