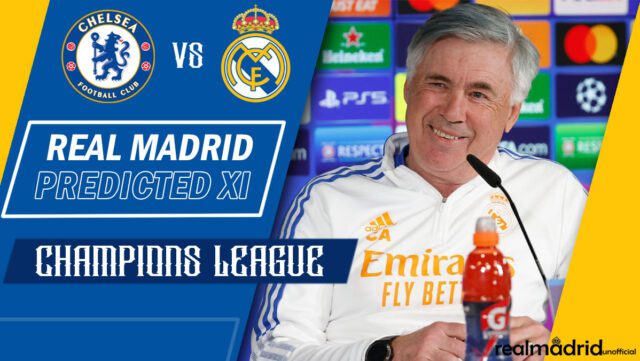 After pulling a surprise comeback against Paris Saint-German in the round of 16 of the UEFA Champions League last month, Real Madrid will travel to London to face Chelsea in the first leg quarter-final of the competition.

Real Madrid remains the only team with the most titles won in the competition. A clash against the defending champions will always be an intriguing one to keep an eye on.

However, the Blues have had the better of Madrid over the years in the history of the competition. Chelsea are yet to lose to Madrid in any competitive game.

With a change in manager, the Los Blancos seek revenge this time around and one who looks to lead the club to that is a former Chelsea gaffer – Carlo Ancelotti.

This article takes a look at what could probably be Ancelotti’s starting lineup at Stamford Bridge:

Thibaut Courtois has been one of the standout performers for Madrid all season. His performance against Celta Vigo only added to his good games. With participation in all of this season’s UCL games, the Belgian should keep his place in goal.

Ferland Mendy made his comeback from injury over the weekend as Madrid recorded a 2-1 win over Celta in the Spanish La Liga. The left-back has been a solid figure in defence for Madrid and his involvement in midweek could be helpful. He is likely to be joined by Dani Carvajal, who started the last game from the bench over the weekend.

Eder Milito and David Alaba should complete the central defence pairing as they have done for the majority of this campaign.

Fede Valverde was quite the great piece to the artwork against PSG at the Santiago Bernabeu. The Uruguay international should be a likely option to face Chelsea’s athletic midfield on Wednesday, giving rest to one of Modric or Kroos. Casemiro and Modric should also be the next options next to Valverde at the Bridge.

With quite a midfield that runs a lot, Madrid will need to neutralize the threat of the Blues’ midfield options.

Benzema returned to the line-up on Saturday, scoring twice from the penalty spot as Madrid extended their lead at the top of the La Liga table to 12. The forward had been missing from action since the league game against Mallorca.

Completing the attacking trio will be Marco Asensio and Vinicius Junior on each side of the flanks.

MUST READ: How can Carlo Ancelotti prepare to keep Kai Havertz silent