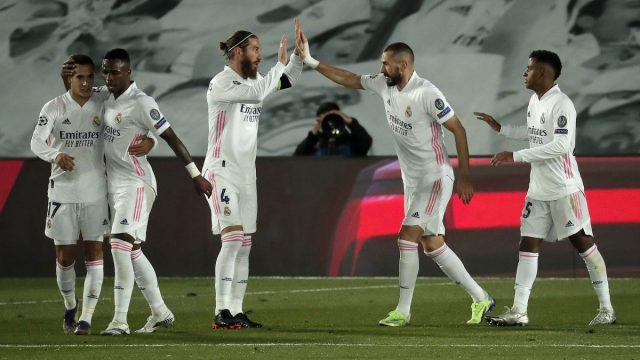 Real Madrid are looking like a more formidable team at the moment after a series of good performances which has shut Zinedine Zidane critics once again.

The manager had been under series criticism from both fans and media people who felt the Frenchman was losing the changing room and needed to be replaced. However, that conversation has been put to sleep after Zidane steered the affairs of the team in their victories over Sevilla, Borussia Monchengladbach, Atletico Madrid and Athletic Bilbao respectively.

His attention will now be on the game against Eibar on Sunday, a side that is currently on a six-game unbeaten run across all competitions. Zidane knows the nature of such games and he is hopeful that his rotation may not come back to hunt him over the weekend.

Here, we take a look at the possible lineup the former Madrid midfielder will name to face Jose Luis Mendilibar’s side:

The Belgium international is expected in goal once again on Sunday considering the great form he finds himself in currently. He has managed three clean sheets in his last four games and he will be yearning for another over the weekend.

There could one change made in the backline for Madrid this weekend, with Marcelo expected to come in for Ferland Mendy. Zidane confirmed the Brazilian has been training at a very impressive rate and it is likely that he gets his chance against Eibar.

Raphael Varane and Sergio Ramos will also be expected to continue their partnership at the heart of defence.

Having played every single game since the last international break, Luka Modric could be rested with Federico Valverde taking his place. He will have the chance to play alongside Casemiro and Toni Kroos in the middle of the park as was the case earlier in the season.

Lucas Vazquez could also be a casualty of Zidane’s rotation this weekend with Rodrygo Goes coming in to take his place. The young Brazilian has been helpful anytime he has been on the pitch this season and he will line up with Karim Benzema and Vinicius Junior in attack.