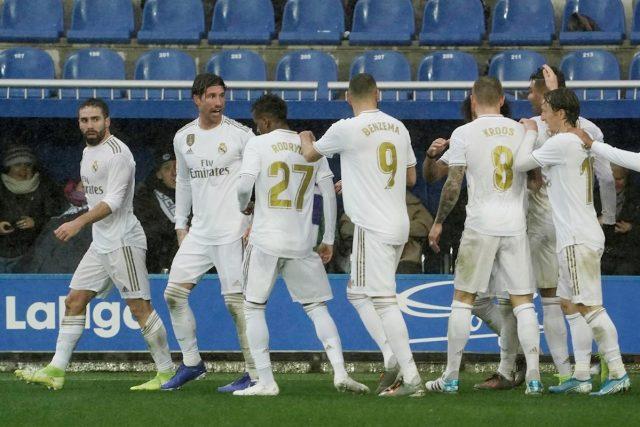 Real Madrid will face Granada in their next game in the Spanish La Liga on Monday as they hope to end Barcelona’s two year dominance.

Zinedine Zidane’s side recorded their eighth win in eight games following the 2-0 victory over Deportivo Alaves on Friday night, and are yet to drop points season the league restarted.

The manager has built a solid team since the return and despite a few rotations, he has managed to achieve the expected results.

In this article, we take a close look at how the Frenchman will assemble his team for the visit to Granada on Monday night.

With his impressive performances, the shot-stopper is not any close to being on the bench as he eyes the Zamora trophy for a third time. Thibaut Courtois is yet to concede a goal in his last five league games, with his clean sheet tally at 18 after 32 games.

Dani Carvajal is expected back into the lineup after serving his suspension during the game against Alaves. The right-back has played all but six of Madrid’s games this season, keeping 16 clean sheets.

Raphael Varane and Sergio Ramos should to the heart of defence for Los Blancos despite the impressive performances of Eder Militao in the last game. The pair have been the preferred centre-back option for the gaffer.

With Marcelo out for the next two weeks or more, Ferland Mendy should complete the back four playing at the left-back position.

Fede Valverde will likely come into team the for the clash against Granada, with Luka Modric to be rested for what could be a title winning game against Villarreal next week.

Casemiro has been the pillar for the league leaders and will keep his place in the team of Monday against the ninth-placed team.

Toni Kroos should also maintain his spot for the contest having recently started from the bench in the 1-o win over Athletic Bilbao.

Asensio has been started in the last two games for Madrid, and scored on Friday but he could be replaced by Brahim Diaz, who has hardly played since the restart. He was on the field for two minutes against Alaves.

Karim Benzema will also keep his place in the team despite complaining about pains at the back of his leg. The Frenchman has 18 goals in the league this season and is on course to hit 20-goal mark with three games to go.

Eden Hazard is also likely to return to the set-up to pick up match fitness ahead of the Villarreal game. The Belgium international has not had a smooth campaign, scoring only one goal.