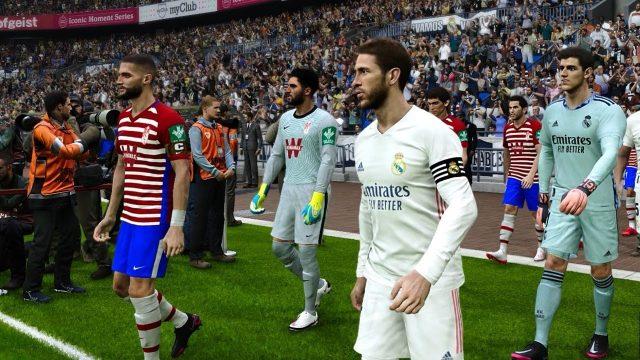 Real Madrid will be hoping for a strong finish to the year when they play Granada at the Alfredo Di Stefano Stadium on Wednesday night. The match against Diego Martinez’s men will be the penultimate game for Zinedine Zidane’s side this year.

The Los Blancos having enjoyed a torrid time the autumn, but the Frenchman has been able to turn things around for the club and they find themselves in a more comfortable position at the moment. Madrid have taken five wins from their last five games across all competitions since their humiliating defeat to Shakhtar Donetsk.

On the back of those winning streaks has been a formidable team put up by Zidane and there have been little changes to the team and here, we take a look at how the gaffer will lineup his side once again for the encounter.

Thibaut Courtois is expected to keep his place in between the sticks for Madrid on Wednesday night. The 28-year-old failed to keep a clean sheet in any of the games against Granada last season but he will be hoping for an improvement in midweek.

Considering their great performances in the last five games, Zidane is unlikely to make changes to his defensive set ups for Wednesday’s game. Dani Carvajal, Raphael Varane, Sergio Ramos and Ferland Mendy will keep their places in the team. The manager despite having plenty of options hopes to maintain a winning defense.

With Luka Modric’s fitness now a concern for Zidane, Federico Valverde is in line to come in for the Croatia international against Granada. Casemiro and Toni Kroos who have been sensational in the last few games will be needed once again to overcome the tireless midfield of the opposition.

With the kind of intensity they played with on Sunday, Lucas Vazquez, Karim Benzema and Rodrygo Goes will likely continue as the front trio for Madrid. Benzema has been involved in seven goals in the last four games and it will be a crime to deprive him of a place in the starting lineup.