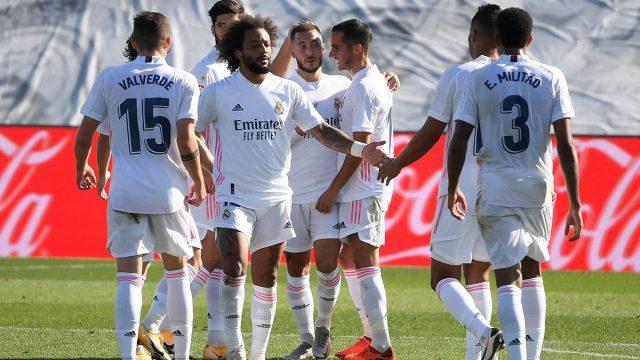 Real Madrid will play Inter Milan in their the first of two back-to-back group games against the Italian side in the 2020/21 UEFA Champions League campaign.

Zinedine Zidane and his team put up a convincing performance over the weekend against a struggling Huesca side as they won by four goals to one.

The manager fielded a strong team against the Spanish side but he was quick to withdraw some key players at some point in the game to get them to rest before the Inter game.

Thibaut Courtois is certain to start in goal once again for Madrid. Though the club has not got off to a flying start in the competition, the goalkeeper continues to work hard to help his team.

Lucas Vazquez became the latest casualty suffered in the ongoing right-back problems at the Santiago Bernabeu. Eder Militao could be drifted in to fill the void in that position against Antonio Conte’s men.

Raphael Varane after being rested over the weekend is expected to return into the team to partner Sergio Ramos. The pair have been good for so many years, but the last few seasons haven’t been the best and they would need to their game against Inter.

Mendy’s return will also see Marcelo drop back to the bench in midweek. The Frenchman provides a lot of balance to Madrid’s backline and though he’s not offensively potent, he’s got into some dangerous positions at times.

Luka Modric lasting the whole 90 minutes on Saturday means that the Croatia international could be replaced by Toni Kroos as part of the changes to the line up against Inter. Valverde and Casemiro are also expected to keep their place in the team.

Marco Asensio is beginning to pick up his form gradually and his presence on the right-wing gives Zidane a lot of attacking options. He will look to grab a goal to boost his confidence in Champions League.

With two goals and an assist on Saturday, Karim Benzema looked sharp against Huesca and he will be hoping such is the case on Tuesday also against the Nerazzurri.

Eden Hazard marked his return to Spanish football this season with a very cracking goal from long range against Huesca to get the party started on Saturday. Zidane will be counting on his individual brilliance once again when they host the Italian side at the Alfredo Di Stefano Stadium.