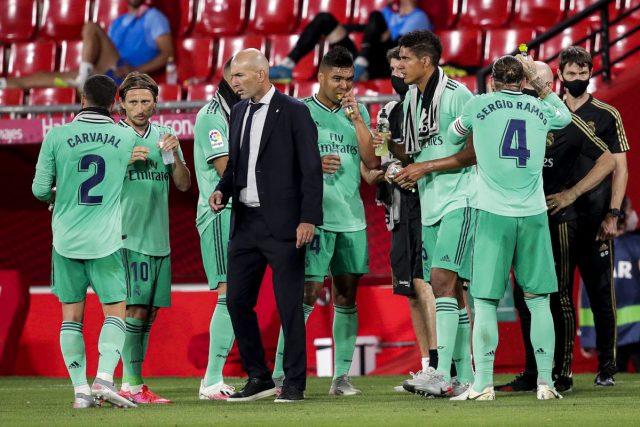 La Liga champions Real Madrid will be hoping to overturn their first-leg deficit when they travel to the Etihad tomorrow for their second leg Round of 16 Champions League tie.

Manchester City registered a great win when both teams met at the Bernabeau back in February, implying that Los Blancos have a herculean task to do if they want to progress to the quarter-finals of the tournament. Isco scored the opener of the game for Real Madrid bu the Citizens bounced back and scored twice to win the game 2-1.

Real Madrid will be without their captain Sergio Ramos due to suspension. However, he has been included in the squad and travel with the team. Mariano Diaz is also on the sidelines after testing positive for the coronavirus. Gareth Bale and James Rodriguez have been left out of the squad by Zinedine Zidane.

Thibaut Courtois remains the undisputed first-choice goalkeeper for Zidane this season. He has two clean sheets from six UCL games he has started, both coming against Galatasaray. Additionally, he averages 2.5 saves per game in the Champions League.

Dani Carvajal will start on the right flank as usual. He made a clumsy challenge on Sterling in the 1st leg that led to the winning penalty for Manchester City. Zidane will expect him to bounce back in the 2nd leg.

Ferland Mendy gets the nod for the left-back position ahead of Marcelo. As Ramos will not be available, Mendy will start as he is defensively better than Marcelo.

Eder Militao gets to start alongside Raphael Varane as the centre-back duo as Ramos is out due to suspension.

Casemiro will start as the ‘number 6’ in the midfield as usual. He has arguably been the best defensive midfielder in the world this season and will be given the task to stop the likes of De Bruyne and Jesus tomorrow.

Luka Modric and Toni Kroos will start alongside Casemiro in the midfield. Federico Valverde will most probably be on the bench as the midfield duo of Modric and Kroos have been impressive for Los Blancos since the resumption of football.

Manager Zidane has some decisions to make in the final third as Marco Asensio is now available. Zidane will have to choose between Vinicius and Asensio for the right winger position. We predict that Zidane goes with experience and starts Asensio ahead of Vinicius.

Top-scorer Karim Benzema will start as the striker as usual and will have the responsibility to lead the attack against City tomorrow. Reports of Hazard being injured was circulated earlier this week but it looks like he’s fit and fine and is ready to start on the left-wing.