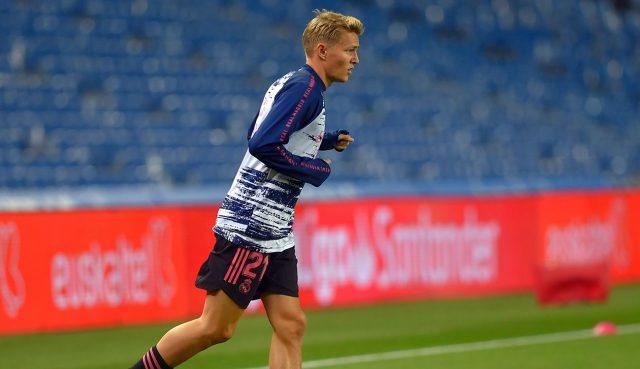 Real Madrid are set to play their first home game of the 2020/21 La Liga campaign on Wednesday night against Real Valladolid.

The match will be played at the Alfredo di Stefano Stadium with the Santiago Bernabeu Stadium still undergoing rehabilitation works.

Zinedine Zidane’s side were victors in the last game, beating a recharged Real Betis side by three goals to two during last weekend.

The gaffer set up his team in a surprising 4-3-1-2 formation with Karim Benzema and Luka Jovic being paired together with Martin Odegaard also starting his second consecutive game for the club.

However, that formation looks likely to change and we take a look at how Zidane will likely assemble his side for the game against Sergio’s side in a 4-2-3-1 formation.

Any decision for him not to keep his place? Courtois was once again impressive against Betis and made some crucial saves to make sure his side got the win on Saturday. The shot-stopper should maintain his spot for this game too.

Zidane will also be expected to maintain the same backline for the third game running and that means Dani Carvajal, Raphael Varane, Sergio Ramos and Ferland Mendy all start against Valladolid.

Casemiro and Luka Modric are expected to start together in the middle of the park as the two pivots after Toni Kroos came off at half time after suffering a knock in the last game.

Martin Odegaard should maintain the No.10 role ahead of Isco though his performance against Betis was not too convincing.

The two Brazilian starlets are set for a recall into the starting eleven for the game against Valladolid after playing no part in the last game. Rodrygo and Vinicius’ pace will be needed against a side who look so compact in defence but the latter would need to improve upon his decision making.

Karim Benzema will keep his place as the lone striker on Wednesday.