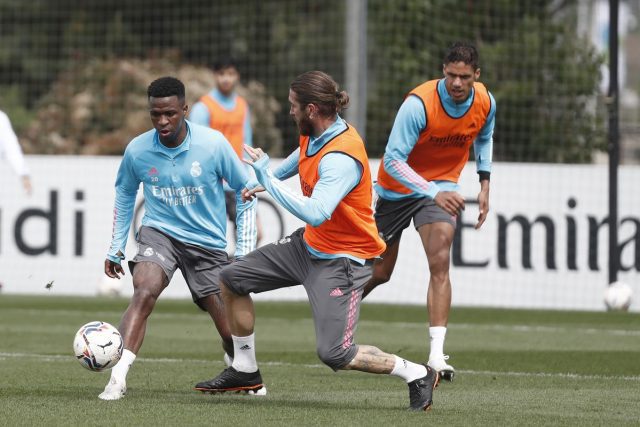 With the turn of events of things in the Spanish La Liga over the last week, Real Madrid are still very much alive in their quest to defend their league title.

Both Atletico Madrid and Barcelona were on the losing end in their last games, meaning that Madrid stayed ahead of Barcelona on the head-to-head basis while Atletico are just two points above Zinedine Zidane’s men.

Real Madrid plays Osasuna at the Alfredo Di Stefano Stadium on Saturday looking to capitalise on the poor results of their two rivals.

In this article, we take a look at how Zidane could lineup on Saturday against the 11th-placed team Osasuna on the league table.

Thibaut Courtois is expected to keep his place in goal for Madrid on Saturday. The shot-stopper has been very crucial in Madrid’s season and boasts of 15 clean sheets in the league, including four in his last five matches.

Zidane will most likely keep his three-man defence against Osasuna despite the fact that Sergio Ramos is available for selection again. The three have been impressive and deserve continuity in front of Thibaut Courtois.

Alvaro Odriozola and Marcelo are expected to play as the wing-backs with the former replacing Dani Carvajal who has suffered yet another injury to his hamstring. Antonio Blanco has earned the trust of Zidane and could partner Casemiro in the middle of the park with Luka Modric and Toni Kroos expected to given rest.

Zidane could decide to play his favorite trio of Marco Asensio, Karim Benzema and Eden Hazard before unleashing them against Chelsea in midweek. They need to adjust to their movement and communication before they can play together continuously.