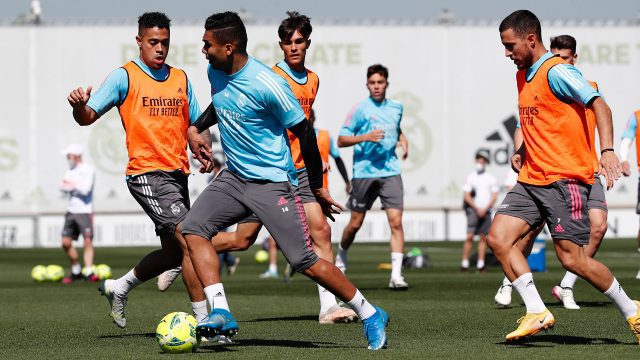 Real Madrid will take on Sevilla over the weekend in a game that has massive importance in deciding the winner of the Spanish league title this season.

With just two points off the first-place team, Madrid have the opportunity to go top knowing that Barcelona and Atletico Madrid play each other on Saturday.

Madrid are without their Sergio Ramos, Lucas Vazquez, Dani Carvajal and Raphael Varane for the game but the home side have the quality to beat Julen Lopetegui’s men.

Here’s how we think Zinedine Zidane may lineup his squad for the crucial game against Sevilla:

Courtois will once again be in post for the Los Blancos on Sunday. The goalkeeper continues to show his good qualities and is still in the race for the Zamora trophy.

With the two trusted right-backs out, Alvaro Odriozola could be playing his biggest game this season while he will be joined by Eder Militao, Nacho Fernandez and Ferland Mendy, who were all in the game against Chelsea in midweek.

The impressive trio of Luca Modric, Casemiro and Toni Kroos will have an extra engine in Federico Valverde to help them in the middle of the park. Modric and Kroos seem to be struggling physically considering the number of games they have played at the club and the presence of Valverde could ease the pressure on them.

Zidane will likely keep his faith in Eden Hazard for one more game. The former Chelsea star has been disappointing all season but the gaffer says he deserves continuity to rediscover his best form. Karim Benzema will also look to continue his good run of form once again.

Toni Kroos: “We deserved to be eliminated against Chelsea”