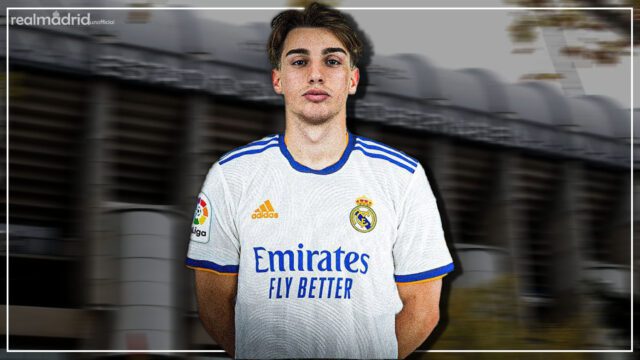 Iker Bravo Solanilla who was one of the top talents in Barcelona’s youth Academy, La Masia has signed for Real Madrid Castilla. The 17-year has committed his future to Real Madrid on a long-season loan from German Bayern Leverkusen with a purchase option of close to €6 million.

The young Spanish striker left Barcelona in 2021 after failing to reach an agreement with the Catalan club over a contract renewal to join Leverkusen as a free agent in July 2021.

In October, he made his first appearance for the first team, appearing for 13 minutes against Karlsruher in the Cup’s second round and two weeks later he played 11 minutes in a Bundesliga match against Hertha Berlin – becoming Leverkusen’s second-youngest debutant in the Bundesliga at 16 years and 298 days of age, entering the game as a substitute and participated as a forward in a 1-1 draw.

However, he attracted interest from the Los Blancos management as they look to bolster their squad for the Real Madrid Castilla.

Bundesliga club Bayern Leverkusen confirmed this news via their official website on Monday that they have reached an agreement with Real Madrid.

Real Madrid will assess the performance of the young lad and will decide whether to sign him on a permanent deal after the season.