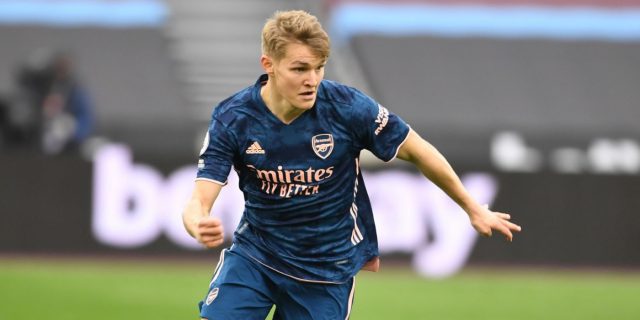 Real Madrid are reportedly not considering a permanent transfer for midfielder Martin Odegaard anytime soon per reports from Jose Felix Diaz of MARCA.

The Norway international is currently on loan at Premier League side Arsenal, where he has played a key role since joining them in the winter window.

There had been various reports that Odegaard was seeking clarification from both the club and Zinedine Zidane on what his future holds at the Santiago Bernabeu upon his return from his loan spell.

Martin Odegaard has seen much of a playing time since moving to the Premier League and has become an integral part of the Gunners team, with Mikel Arteta already said to be pleased with his performances.

However, Diaz says the player is fully committed to making it a success with Madrid, a determination the club also buys into despite playing outside the famous white jersey.

Madrid have already had time and made investments in the 22-year-old for his development and it is a no surprise issue that they are not willing to give up on the player.

Odegaard still has two years left his current contract with the Los Blancos and the club will keep monitoring his progress while with the North London side.

Mikel Arteta looking for a permanent deal for Martin Odegaard