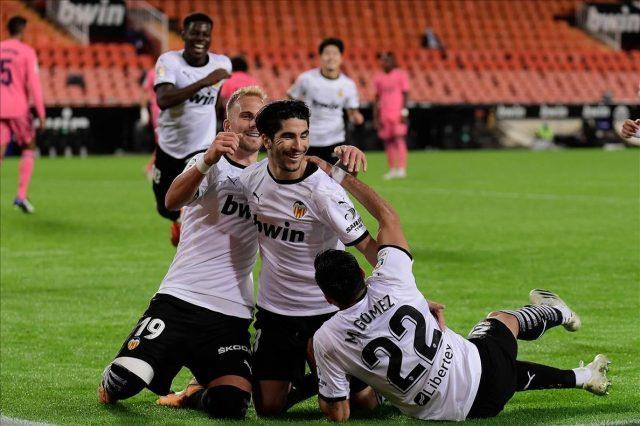 Real Madrid red hot form in the Spanish top flight was halted on Sunday when they played Valencia at the Mestalla Stadium.

A Carlos Soler hat-trick from the spot and a Raphael Varane own goal was enough to complete the comeback for the home side after Karim Benzema opened the scoring.

Zinedine Zidane was forced to make changes to the side that played in the 4-1 win over Huesca last weekend, Marcelo, Isco, Varane and Vinicius Junior all returning to the starting line up.

It was the Brazilian who assisted Benzema for the opening goal on the night in the 23rd minute, with the Frenchman scoring his third league goal in the 2020/21 campaign.

That lead lasted for just 12 minutes after Soler sent Valencia levelled after the referee called asked for a retake after Thibaut Courtois had saved the first attempt.

Los Che took the lead before after with Varane putting the ball into his own net after a crapy play at the back.

It was all Valencia after the recess with Javi Gracia’s men playing a better football compared to Madrid’s.

They were returned nine minutes after the break with Marcelo giving away a penalty which wad successfully converted by Soler once again.

There was no stopping the Spain international for his third goal Madrid captain Sergio Ramos also gave away a cheap penalty moments later.

The loss means that Los Blancos have mow lost two games in the league so far this season after eight games played while they now drop to the fourth position – four points behind leaders Real Sociedad.

Valencia on the other hand now occupy the ninth position after their latest win and go into the international break with a resounding victory.

Madrid are expected to host Villarreal in their next league game after the international on November 21 before playing Inter Milan in the Champions League four days later.