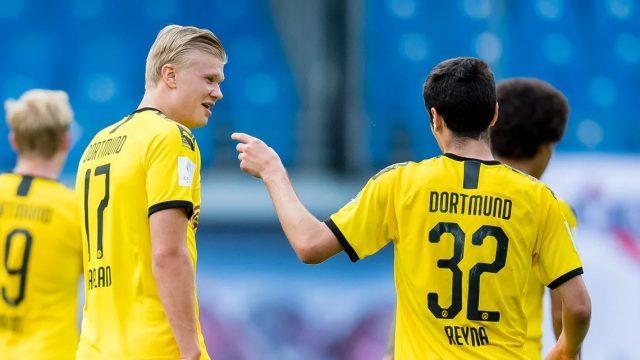 Real Madrid are reportedly monitoring the developments of Erling Braut Haaland and Giovanni Reyna, with the aim of bringing both players to the club in the next year or two.

The pair have been very key for the German club since joining up with the first team last season.

Prior to moving to Germany, Haaland was linked to Madrid after his heroics with Red Bull Salzburg in the group stages of the 2019/20 campaign.

However, it was Dortmund who moved swiftly to ensure that the Norway international continued his development at the Signal Iduna Park.

Per reports in Spain, both players are being watched by the Spanish giants and could trigger some transfer movement should they continue their impressive performances in the German Bundesliga.

In the seven goals Dortmund have scored so far in the league this term, either one of Haaland or Reyna has directly been involved in all of them.

The USA international has scored once and provided a further three assists while Halaand has four goals and one assists in three games for Lucien Favre’s men.

At a young age of 17 and 20 respectively, the impressive duo still have a lot of years to play in professional football in the absence of any career threatening injury.

They could also play a key role in Madrid’s next set of players who are looking to dominate domestically and in Europe.

The links with Haaland is no new thing for Zinedine Zidane’s side and with Karim Benzema nearing his last playing days, the Norwegian could be a long term replacement for the Frenchman.

Although AS reports that the striker is only being watched as an alternative to Kylian Mbappe, it is also possible that Madrid sign both players in the next summer having been inactive in the just ended transfer window.