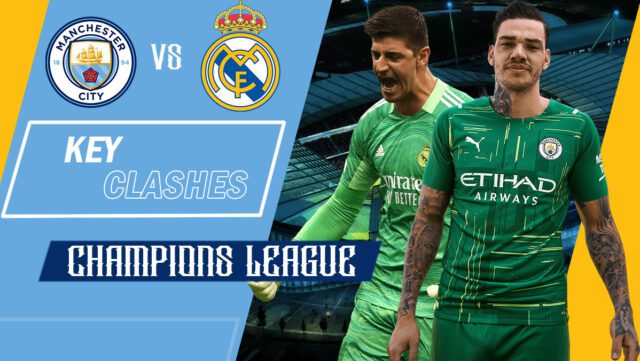 Real Madrid will travel to play Manchester City at the Etihad Stadium on Tuesday in the UEFA Champions League. It will be a battle between the current league leaders of Spanish La Liga and the Premier League.

Despite enjoying some entertaining and surprising football in the competition so far, this showpiece promises to be more tricky and entertaining as Manchester City is looking forward to progressing to the finals for the second time in a row and possibly winning the title for the first time. Madrid are in contention to also clinch the trophy for the 14th time.

Our main focus will be on the two goalkeepers who will be in post for the two sides. The question is, how effective and important have they been to their respective club?

Football has evolved in recent times and goalkeepers are now key players in each team. Some are made to even contribute to the team’s build-up.

It makes sense to highlight how these two fantastic goalkeepers have been impressive in the competition so far for both clubs.

In this year’s competition, Ederson Moraes has managed nine games for Man City and has kept four clean sheets, making total saves of 10 averaging 1.12 saves per game. One of his main traits in a post is his ability to keep the ball at his feet and play from the back comfortably. Something a lot of goalkeepers find difficult to do.

He’s able to initiate attacks in games with his long-range passes and also switching on plays. Having a goalkeeper like him is a huge boost for the team. Ederson reads the game very well and is able to sweep and clear his lines when he senses danger at the back. Although his team doesn’t concede a lot of chances from opponents but the little he has faced in the competition, he’s been able to deal with them very well.

Since the arrival of Thibaut Courtois, one of the things that were unsettling him in the goalpost was the ability to play from the back with his defenders. However, the Belgian international has been able to turn things around and redefined his game to be able to play out from the back even under pressure with his teammates. He’s been one of the standout performers in the competition so far, dealing with a lot of saves.

Courtois saved a penalty at the round 16th stage of the competition and also transformed that performance in the Quarter Finals when they came up against Chelsea. He made a couple of great saves to keep his team in the tournament. The Los Blancos heavily depend on him in post. Courtois is one of the goalkeepers with a lot of saves in the competition. He has made 43 saves in the 10 matches he has been in post. A total of four clean sheets have been recorded by the shot-stopper. It wouldn’t be ideal for Madrid to leave him out on the bench when he’s fit to be in the post.

A very tough match awaits us on Tuesday, 26th April 2022 as these two goalkeepers can be the key players to decide the game.