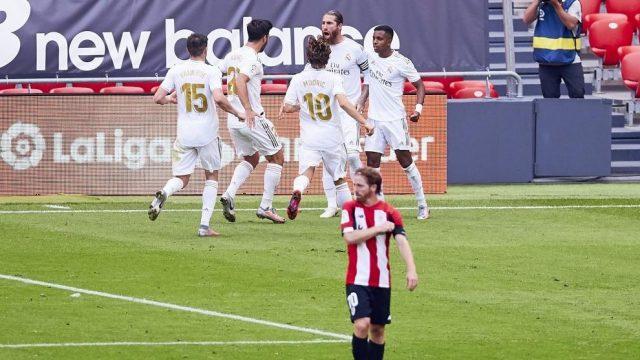 Per latest reports in Spain, Real Madrid are reportedly looking to sell players in the summer transfer window rather than bringing in new recruits into the team for next season.

Zinedine Zidane’s side were mentioned to add massively to their squad for next season in order to mount another title challenge. They are currently on top of the La Liga table, four points ahead of second placed Barcelona with four matches left to be played until the end of the Spanish season.

However, new players are not the priority for Los Blancos this summer due to the financial implications the coronavirus pandemic carries along with it, with Marca claiming the club will only bring in players in 2021.

The reports also indicates that the club are preparing to raise a sum of €200 million through the sale of players this summer. Javi Sanchez and Achraf Hakimi have already been shipped out by the Spanish club, with loan players Borja Mayoral and Oscar Rodriguez also attracting strong interest from league rivals Villareal and Valencia.

In the first team at the Santiago Bernabeu, the likes of Gareth Bale and James Rodriguez are very much linked with a potential move away from the club in the summer, with the latter having just a year left on his current deal at Madrid.

Offers for Dani Ceballos, Brahim Diaz and Mariano Diaz will also be assessed in the wake of trying to raise the said amount.

Madrid have long been linked to Paris Saint-Germain’s Kylian Mbappe and Borussia Dortmund’s Erling Braut Haaland, with reports suggesting that one of them if not both could be a priority in the summer 2021 for the Zidane’s team.