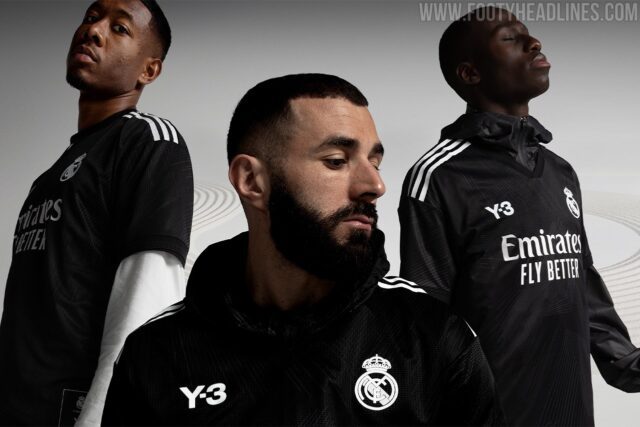 Mainly black and white, the special edition fourth kit will be worn by the Los Blancos when they face Barcelona in the El Clasico on Sunday, March 20. 2021/22 Real Madrid fourth kit and other collections are also expected to be available for purchase starting on Friday, March 18.

Real Madrid fourth kit is also a part of a wider release that includes off-pitch styles. The images of Real Madrid’s special fourth kit and goalkeeper shirts by the Adidas Y-3 was first leaked by a Twitter user.

His images also give the first proper outlook of the kit outside FIFA graphics, adding to the fact that the jersey will be released for sale.

According to the images circulating on social media, the Adidas Y-3 Madrid fourth kit comes with a unique typeface, with the font and number of Toni Kroos being the only one leaked at the moment via @niuchak423.

Adidas are set to launch a brand-new special-edition Real Madrid kit shortly in collaboration with Yohji Yamamoto. The fourth strip features the branding of Yamamoto’s Y-3 brand and brings back memories of Madrid’s iconic 2014-15 third kit.

Real Madrid’s fourth kit shirt goes for a clean aesthetic in black with all-white logos and featuring a faint graphic across the front, back and sleeves, with the Y-3 logo sitting on the left chest of the Adidas Y-3 Madrid fourth football shirt, while a special jock tag that includes the Y-3 and Real Madrid logos, as well as Yamamoto’s signature, sits on the lower left.

The shorts and socks of the kit are also black, with the former featuring the same graphic as the shorts. The socks are black with white Adidas stripes and a large Y-3 logo on the front. They boast subtle horizontal lines.