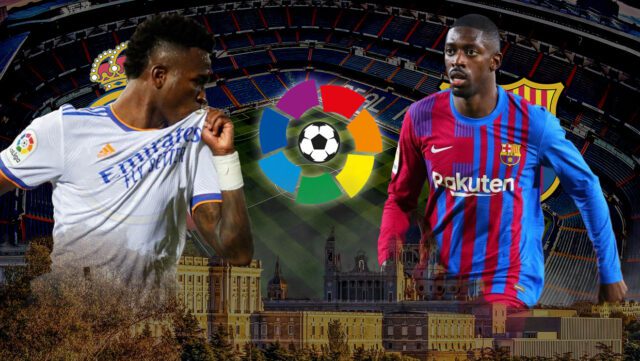 The biggest fixture possible in a footballing calendar is here: The El Clasico! Regardless of the competition or the year it is being played, El Clasico never fails to attract eyes worldwide.

And in 281 meetings in 120 years of the rich history of this rivalry, Los Blancos leads over their Catalan rivals with 100 victories to 96. After a dominating and humbling performance by Real Madrid on matchday 10 against Barcelona, the Royal Whites appear to be in the best form of their season, heading towards matchday 29 against Barcelona.

Along with the sporting rivalry comes the rivalries of ideologies, player rivalries, and manager rivalries. All in all, once you step into the ground for a team, chances are you’ve become an eternal sworn enemy of the opposition. And this time, we’re looking at the fight of the young guns of the two sides: The Brazilian Vinicius Jr. and The French Ousmane Dembele.

How do Vinicius Jr & Ousmane Dembele fare against each other?

Vinicius and Dembele have recently been started to be compared against each other, but Vinicius seems to have a great lead against the French attacker this season. Vini has been in tremendous form, attacking the opponent’s right flank week in and out.

His dribbling skills posed great danger to opponents at the start of his career. Now complemented by his fine finishing, developed under Carlo Ancelloti, the Brazilian is one of the most promising talents in the world and a player that Real won’t allow the opponents to touch.

Vinicius Jr, this season has played nearly thrice as minutes as that Dembele’s. He is the attacker with the seventh-highest minutes played in La Liga, giving the Brazilian a long advantage over the French rival. And minutes played don’t even begin to tell the whole picture. The Brazilian has 17 goals and 14 assists this season in all competitions compared to Dembele’s 2 goals and 7 assists. His 14 goals in the league also put him up at the top just below Real’s goated Karim Benzema, making him the second-highest goal scorer in the league.

It’s fair to state Vinicius has been consistent throughout the season, partnering well with Benzema and playing his role as good as it comes. Whereas, Dembele, on the other hand, has been inconsistent not just this season but during his whole stint at Barcelona. As Xavi took over the club following the sacking of Koeman, Dembele was under the heat of being released from the club due to several reasons. However, his performances since January saved the French footballer. His assistance in attack and five assists this year can be said to be a factor behind the Catalan’s recent run in the Spanish League.

The unpredictability of Dembele’s performance is still much less of a concern for the Galacticos. The first player that the French would be fighting will be Vinicius himself. Dembele is pretty much an unpredictable player, and shouldn’t be much of a concern for Ancelloti’s boys. As David Alaba will step in to cover for injured Real’s left-back Ferland Mendy, there seems to be nothing that Dembele could pull off against Real’s brick in the backline.

It’s often said, “Stats don’t tell the full picture,” but we don’t need to go beyond stats for the comparison here. Vinicius Junior has been a key player to Real’s squad this year, contributing massively, and has a clear advantage over Dembele, any day this season. Goal spree of Vinicius makes him the favourite in both the squads to score, in absence of Karim Benzema, who might miss out on possibly the last Clasico of the season.