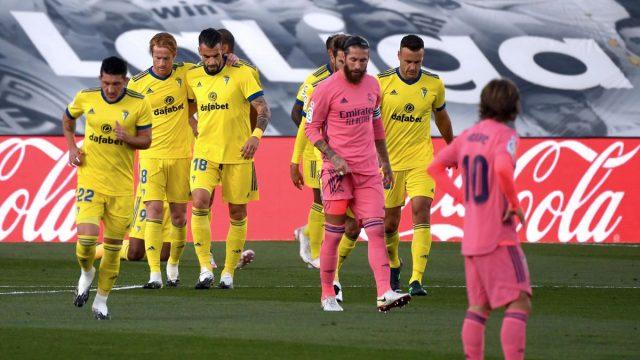 Real Madrid’s return from the international break did not go the way as they expected as they ended up suffering their first loss of the season to the newly promoted Cadiz.

The game which took place at the Alfredo Di Stefano Stadium on Saturday saw Zinedine Zidane’s team play perhaps one of their worse games in quite a long time.

A 16th minute strike from Anthony Lozano was enough for the visitors to seal all three points against the defending champions of the Spanish top-flight.

But for Thibaut Courtois, Madrid would have finished the game with a disgracing scoreline but the Belgium international was on hand to keep the score at just 1-0.

The 28-year-old made three important saves from the opposition in the first half to make sure that the Los Blancos were not far behind Alvaro Cerver’s men.

Zidane, who made four changes to the side the beat Levante before the international break was left furious after the first 45 minutes prompting immediate reaction after an abysmal opening half.

The gaffer took off Sergio Ramos, Lucas Vazquez, Isco and Modric at half time in a bid to draw back level but his substitutions were far from achieving the intended aim.

The introduction of Eder Militao, Marco Asensio, Federico Valverde and Casemiro sparked life into Madrid’s attack however they found no way past Jeremias Ledesma in goal for Cadiz.

The win still leaves the 34 times La Liga winners still on top of the league with 10 points, levelled with Getafe, Cadiz and Granada with a game in hand.

There are a lot of questions to be asked from the loss on Saturday ahead of two crunch encounters against Shakhtar Donetsk in their opening fixture of the 2020/21 UEFA Champions League campaign before traveling to Camp Nou for the El Clasico.