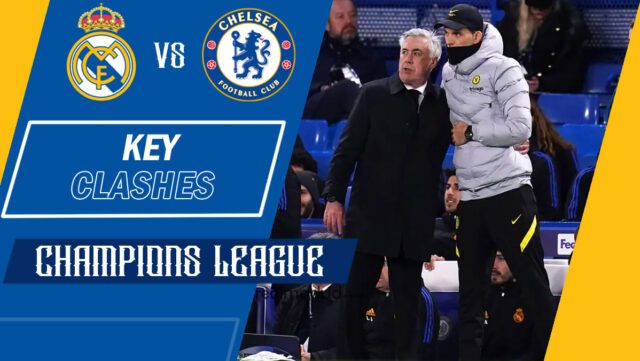 It’s the second leg of the UEFA Champions League quarterfinal and Real Madrid will be locking horns with London-based club, Chelsea.

Madrid are one step ahead of qualifying for the next stage of the competition after beating Chelsea 3-1 to win at the Stamford Bridge. A night that saw Karim Benzema scoring a hattrick and winning the Champions League Player of the Week.

Despite playing their way into a 3-1 victory back in London, there is all to play for in the case of Madrid with the away goal rule no more available in the tournament.

For Chelsea, it’s not over yet for them. They will compete till the final whistle is blown. They believe in football anything can happen within 90 minutes and it’s all or nothing for them.

This is not the first time the team have been in a situation like that. They need a good performance and a sporting miracle to occur before they can advance to the next level.

The Blues will take inspiration from 2012, where they lost to Napoli (3-1) in the first leg and overturned things around in the second leg to qualify. They qualified from the round of 16 with an aggregate of 5 goals to 4.

For the Los Blancos, they are anticipating edging past Chelsea at home. A difficult and tricky encounter awaits us on Tuesday night.

Here our focus will be on the key clashes that are likely to have an influence on the game:

Two goalkeepers who have been very impressive all season. The battle between these two can be the deciding factor in this showpiece. Although Mendy wasn’t in fine form during the first leg, another opportunity has presented itself for him to bounce back and provide good performance on the day. Courtois provided excellent saves in the first encounter when these two sides met last week. The two goalkeepers have a combined cleansheet of 9 with Courtois having 4 and Mendy having 5. They are expected to keep their places in post for the clubs.

A tough midfield battle that will heavily have an influence on the game and possibly decide the game. Luka Modric has been very good over the past years and once again is expected to help Madrid edge past Chelsea.  He provided an assist for Benzema in the first leg, increasing his assists tally to 3 in the competition. For Kante, he only lasted 45 minutes in the first leg as he was not in fine form. He’s expected to make amends in the second and is highly expected to be at his A-level game. In the entire competition so far, he has only registered an assist but his work rate is very high.

A mismatch contest between these players as both do not have the same playing style and traits but both players have been very excellent. Benzema has been a threat to defenders all season, scoring goals out of nowhere. Despite his goal-scoring abilities, he has also been a standout performer over the last weeks. Without him, Madrid looks blunt in front of the goal and having him in the lineup is a major advantage to the Los Blancos.

Havertz has been the main man upfront for Chelsea being used as a false nine. He is expected to be on target once again for the blues. In the first leg, he was the only attacker who seemed to be pulling off the strings for Chelsea, registering a goal to his name. He has scored 3 goals in the competition.

The match is expected to be played on Tuesday, 12th April 2022 at the Santiago Bernabeu at exactly 7:00 pm.