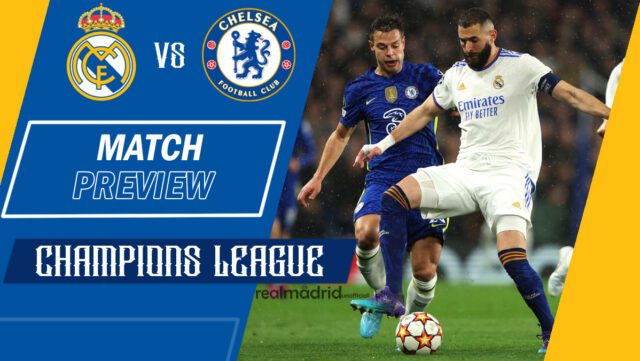 Real Madrid will be hosting Chelsea at Santiago Bernabeu in the second leg of their UEFA Champions League quarterfinal tie on Tuesday, April 12.

Madrid were 3-1 winners in the first meeting at Stamford Bridge, with hitman Karim Benzema scoring all three goals to give the Los Blancos an advantage.

With the away goal rule scrapped from the competition, the tie is far from over considering the result Chelsea could get depending on their performance at the Bernabeu.

Chelsea comes into the game at the back of a 6-0 drubbing of Southampton over the weekend in the Premier League, with Timo Werner, Kai Havertz, Mason Mount and Marco Alonso all getting on the scoresheet.

For Madrid, a Casemiro header in the first half and Lucas Vazquez’s strike in the second half were enough as Carlo Ancelotti’s side recorded a 2-0 win over Getafe to keep their 12 point lead at the top of the Spanish league.

It will be an opportunity for Madrid to make back-to-back appearances in the semifinal of the competition after suffering elimination to Chelsea in the last four last season.

Chelsea’s first game vs Real Madrid at the Bernabeu

The game, which will be played at the Santiago Bernabeu will be Chelsea’s maiden game at the Bernabeu against the Los Blancos. In their last home game against Chelsea last season, Madrid were playing at the Alfredo di Stefano stadium as the Bernabeu underwent renovation works. The game ended in a 1-1 stalemate with Chelsea going on to knock out the Los Blancos at the Stamford Bridge.

The Bernabeu has been the only place where Ancelotti’s side has suffered their only Champions League defeat this season (1-2 loss to Sheriff Tiraspol). However, the knockout stage presents a different opportunity and the venue will be ready for the noise.

Madrid’s home record in the UCL this season

As mentioned already, Real Madrid have only lost once at home in the Champions League (vs Sheriff). Ancelotti’s men have gone on to win all three of their other games in Spain, beating Inter Milan, Shakhtar Donetsk and Paris Saint-German in the process. During that run, they have also scored eight times, conceding four.

It will be about keeping that run running when they welcome the Blues to the Bernabeu.

Mariano Diaz, Luka Jovic and Ferland Mendy are all back in group training and are in line to play a part in Tuesday’s game. Mendy missed the weekend’s victory but he is scheduled to start at left-back against Chelsea. Eder Militao is suspended for the game.

Cesar Azpilicueta has recovered from testing positive for Covid-19 after missing the victory over Southampton. Romelu Lukaku misses out through injury.