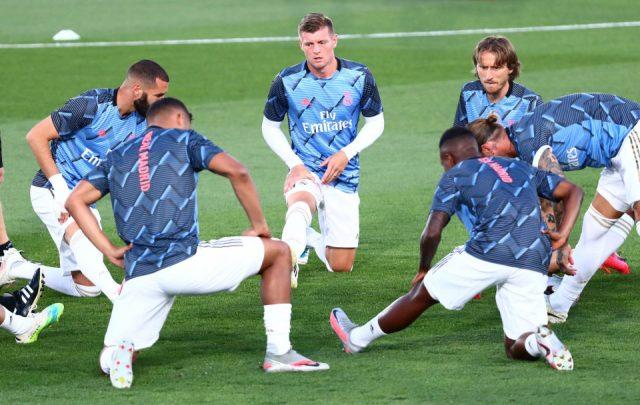 Real Madrid will have their sights set on continuing their charge for the 34th league title in their history when they welcome Deportivo Alaves to the Alfredo Di Stefano Stadium on Friday night.

Madrid have the chance to restore their four points lead at the top of table after Barcelon beat Espanyol by 1-0 on Wednesday to close the gap.

Alaves on the other hand are occupying the 16th position, six points above the relegation zone with four games left to be played to finish the 2019/20 La Liga season.

Zinedine Zidane and his side are on a seven-game winning streak since the league restarted last month, after three months of lockdown. Los Blancos have an advantage to win the league title should they overcome Alaves.

Los Babazorros have lost each of their last five games in the top-flight, which has seen them find the back of the net only once in the process, with Asier Garitano facing the sack as manager over the weekend.

The managerial role has since been handed to Juan Muniz until the end of the 2019/20 campaign, and the former Malaga head coach’s first task will be to beat Madrid who are on course a first league title since the 2016/2017 campaign.

Sergio Ramos and Dani Carvajal will be absent for the game due to suspension on the grounds of card accumulation, having been booked in the win over Athletic Bilbao.

Eden Hazard is also said to be feeling renewed pains in the same ankle he has struggled with, and could miss the second game in a row for Madrid.

For Alaves, Ruben Duarte is out for the remainder of the season with a foot injury, with shot-stopper Fernando Pachecco also on the sidelines with a muscular problem.