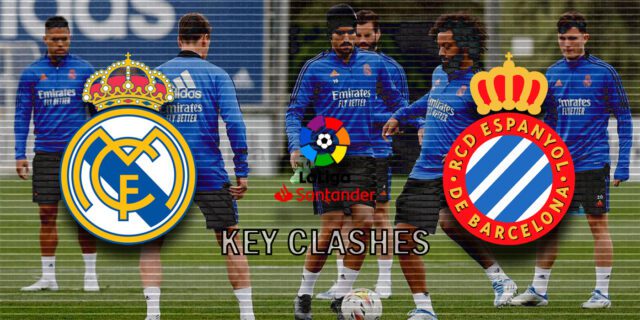 Real Madrid will come up against Espanyol over the weekend in the Spanish La Liga with no pressure to deal with except for a possible UEFA Champions League elimination.

With five games to go until the end of the domestic season, Madrid sit 15 points clear of the league table and could be crowned champions should they earn at least a draw against Espanyol.

In this piece, we take a look at some of the key battles that could come to play in Saturday’s encounter at the Santiago Bernabeu.

Karim Benzema cannot catch a rest any soon as his role in the Madrid team seems to have gotten the club to this level. With 41 goals in 41 games in all competitions this season, the France international is arguably one of the candidates for the Ballon d’Or but he first needs to ensure a league title for his side on Saturday.

Raul de Tomas has grown in confidence in front of goals since returning to the Spanish top-flight. With 15 goals in the league, the former Madrid academy graduate has been key to Espanyol’s game and could come back to haunt his former club on Saturday.

With Casemiro still doubtful and being reserved for the Champions League second leg game against Manchester City, Camavinga’s opportunity in the starting line-up will only get better. The Frenchman also made a cameo appearance against City and impressed in the last 20 minutes of the encounter.

Javi Puado is a player who could be at the heart of Espanyol’s midfield. The central midfielder has been key to some of the good things his side has done this season. Puado has scored four times, the second-most goals in the league for Espanyol.

Another player who has been on the rise for Madrid has been Vinicius Junior, who with his impact from the left-wing. The Brazilian has already registered his best numbers in front of goal as a Madrid player and will look to end the season on a high.

Sergi Darder has provided the most assists in the Espanyol team in La Liga this season. Noted for his decisive final third passes the midfielder could also play a role for his side if they are to get anything from the Bernabeu.