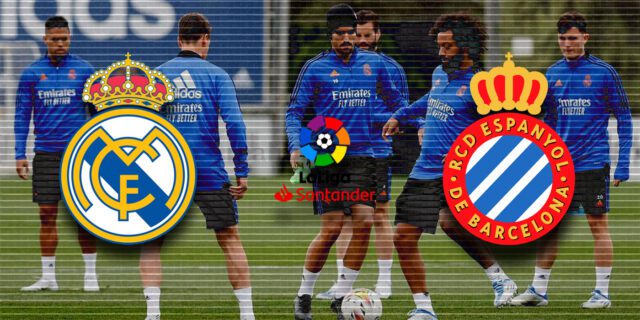 On matchday 34 of the Spanish top-flight league, Real Madrid will host 13th placed side Espanyol in a tricky encounter.

Espanyol are coming into this game with a poor form as they have lost two consecutive matches, losing to Atletico Madrid and Rayo Vallecano at home in their last two La Liga games

This match will somehow be an opportunity for them to at least secure a draw as Real Madrid are set to rest some key players for the upcoming UEFA Champions League semi-finals clash against Manchester City at the Bernabeu.

The first leg of the match ended in a 4-3 defeat to the Los Blancos but the club believes a sporting miracle can happen once again at home which will see them through to the finals of the European competition.

Madrid needs just a point to clinch their 35th league trophy but with one eye set on the Champions League match, some key players will be rested tomorrow as they face Cornellá based Espanyol.

Real Madrid have never lost in their last 24 La Liga home encounter with Espanyol, winning 21 times and drawing 3 times. In the reverse fixture, Madrid lost 2-1. Espanyol would go into this game taking inspiration from the reverse fixture.

The match is scheduled to take place at the Santiago Bernabeu on Saturday, 30th April 2022 at exactly 2:15 pm.

David Alaba and Casemiro will be aiming to recover quickly from their injury to be able to feature in the second leg of the Champions League clash and it wouldn’t be ideal for Carlo Ancelotti to play them tomorrow. Also, Luka Modric will be rested alongside Dani Carvajal and Ferland Mendy.

Due to suspension, Eder Militao and Nacho Fernandez will not be eligible to play in the match. Eden Hazard, Luka Jovic and Mariano Diaz will all be out of action due to injury.

For Espanyol, Keidi Bare will miss out due to a knee injury. All other players are fit to feature in this encounter.

Benzema is exceptional, not just because of what he’s doing now but for what he’s done for these past 10+ years. His career is what I like the most, it’s phenomenal. Karim is not only goals, he’s a fantastic all-around player.”

On the other hand, RDT has been very impressive all season helping his club on several occasions to win matches. The former Madrid player has registered 15 goals, and 3 assists in 30 La Liga games he has played. The 27-year-old is a serious threat to any defence. He doesn’t just score goals but helps in build-ups as well, dropping deep into midfield areas and creating chances as well.

These two strikers are the players to watch in this fixture.