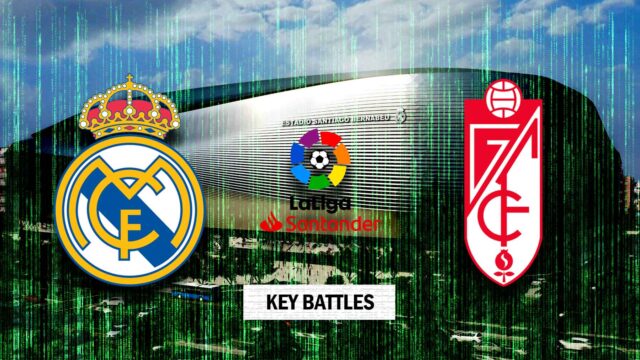 Real Madrid have hit a snag again this season after suffering their third defeat of the 2021/22 season on Thursday in the Copa del Rey encounter against Athletic Bilbao.

Carlo Ancelotti has been criticised for how poor he managed the game against the Basque club as Madrid crashed out of the cup competition.

However, Sunday is another opportunity for the club to keep its momentum in the Spanish top-flight as they currently occupy the top position.

In this article, we take a look at some interesting key clashes that could decide the fate of the game at the Santiago Bernabeu against Granada.

Despite doing everything within his means on Thursday, Thibaut Courtois left the Bernabeu in a furious manner with Madrid conceding late in the game. The game against Bilbao was the Belgian’s first in the post in the Copa del Rey. However, in the league, Courtois has been a complete beast in goal for Ancelotti’s men. He has managed seven clean sheets in 22 games so far, managing 2.6 saves per game.

For Luis Maximiano, he has been in between the sticks on 19 occasions for Granada. With just 1.4 goals conceded per game, the Portugal international has been one of the impressive shot-stoppers in the La liga this season. With Karim Benzema unlikely to play this game, the 23-year-old could have a less busy day at the office compared to his previous games.

Ferland Mendy despite training with the ball is yet o join the team in full training. His absence means Marcelo is likely to step into his position on Sunday, although David Alaba was Ancelotti’s preferred option on Thursday. Marcelo has been restricted to just four league appearances with one start. In all games featured, the team has no clean sheet and coming up against Alex Collado, the Brazilian will need to be at his best.

Collado joined Granada in the winter transfer window and has already featured in three league games, starting just one. The exciting winger could cause trobles for Madrid’s left side of Madrid’s defence. Should he be on his good day, Granada could be putting on a smiling face from the Bernabeu.

If I were Eden Hazard, I would definitely have left the Bernabeu on Thursday questioning my future at the club after he was ignored for the game against Bilbao. But the Belgium international has another opportunity to prove his quality with Vinicius Junior expected to sit out due to suspension. Hazard has barely played this season despite being fit on so many occasions but the winger continues to work hard in a bid to convince his manager. Sunday is a big opportunity for him to impress the home fans once again.

Granada’s Quini will come up against the 31-year-old over the weekend, knowing that the Madrid forward is far from his best. But he will also be wary of the kind of Hazard he will be coming up against on the day. Quini has started 15 games for the 14th-placed side this campaign and has impressed in quite a number of them. That will be the same performance he will be rooting for against the Los Blancos.

The game is expected to kick off at the Bernabeu at 20:00 GMT on Sunday, February 6.