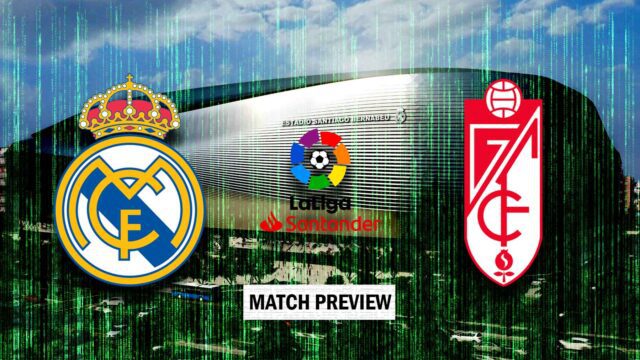 It’s matchday 23 in the 2021/22 La Liga season and league leaders Real Madrid are set to face 14th-placed Granada CF in a tricky encounter.

The Los Blancos are on top of the league log with 50 points, four points clear of Sevilla who are second on the table.

Carlo Ancelotti’s side are in contention to recover from the defeat against Athletic Club in the Copa del Rey last Thursday. A win against Granada will keep title hopes alive and prevent Sevilla from closing on the gap between them.

Granada CF in their last four league games have only picked up two points and are looking to improve their performance to prevent them from sliding down on the league table.

Possible players who could be back from injury for Real Madrid include; Karim Benzema and Dani Carvajal. A huge boost for Carlo Ancelotti, though the Frenchman’s involvement is unlikely due to the upcoming Champions League games.

Mariano Diaz and Ferland Mendy remain doubtful for the game. Attacker, Vinicius Junior who has been sensational this season isn’t eligible to play due to suspension.

For Granada, Santiago Arias and Neyder Lozano are players who are out of the game due to injury.

Karim Benzema is in contention to be the best player in Laliga when the season comes to an end and the Frenchman is certainly a key player to look out for in this fixture. Benzema has scored 17 goals, assisting 7 so far in the season. The number 9 has produced 32 shots on target out of 53 shots he has played.

It is known that the player is returning from an injury but his inclusion in this game would be a huge boost for Real Madrid.