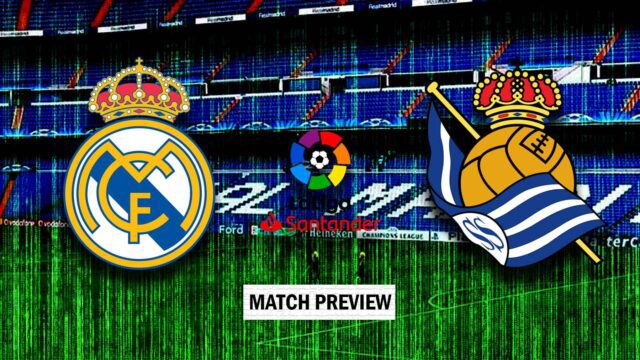 After winning two consecutive La Liga games, Real Madrid will be looking forward to making it three in a row when they come up against Real Sociedad this weekend.

Despite winning their last two games, pressure continues to mount on Carlo Ancelotti as his team has not been able to play the free-flowing football they have been used to all season.

With one eye set on the return leg clash of the round 16 UEFA Champions League clash with Paris Saint-German, Madrid could rotate their squad in this tricky fixture against the Basque outfit.

For Sociedad, the aim is to move up high the league table. They currently lie 6th with 44 points and would be taking inspiration from their last two La Liga games to put the Los Blancos to a real and tough test when they face each other.

The Basque team suffered elimination in the ongoing Europa League Competition last month and will now shift attention and fully focus on the league.

The match would be played at the Santiago Bernabeu at 8pm on Saturday, March 6, 2022.

Real Madrid will be without their key midfielder Toni Kroos who suffered a hamstring injury last Thursday during a training session.

Gareth Bale and Andriy Lunin will continue to be absent due to injury but the availability of David Alaba would depend on a medical clearance from team doctors.

All other players are fit to feature in this game.

Scoring 19 goals and assisting 9 times in the ongoing 2021/22 La Liga is enough to motivate Karim Benzema to do more as he’s set to clinch the Pichichi trophy at the end of the season. Real Sociedad is one of Benzema’s favourite opponents and he’s looking forward to get another goal against them. He has managed to score 8 goals and assisted 8 times against Sociedad in all competitions. He’s certainly a key player in this fixture.

On the other hand, Mikel Oyarzabal is okay expected to lead the charges when they face Real Madrid on Saturday. The young experienced Captain has provided 8 goals in La Liga so far and has also assisted two times in the league. He’s a player to look out for on this occasion. The Spaniard is looking forward to be on target to provide good performance for his team.