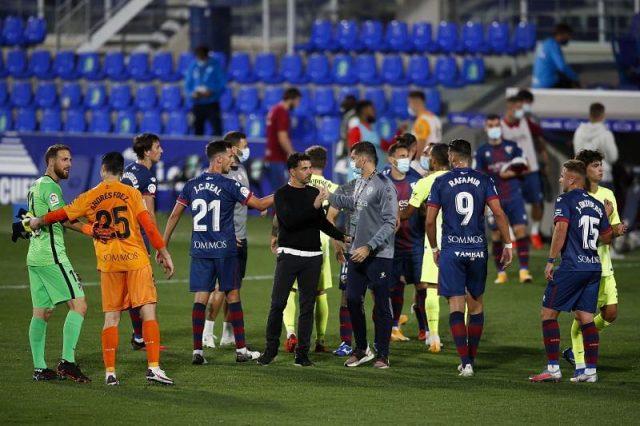 SD Huesca are yet to be win a game since returning to the Spanish top flight for the 2020/21 campaign.

Michel’s side have played seven matches so far and amassed five points in the process, leaving them to occupy the 18th position as things stand.

They face Real Madrid over the weekend, a team which has been lukewarm over the last few weeks. Zinedine Zidane’s side are currently second on the La Liga table after playing six games, one less than that of Huesca.

Madrid have taken 13 points from those games and their only loss of the season so far came against a newly promoted side in Cadiz two weeks ago.

We take a look at some of the key players for Huesca, who are likely to cause a few headache for the Los Blancos team on Saturday.

Huesca’s goalkeeper is one player to keep an eye on in tomorrow’s encounter. The 33-year-old has featured in all seven La Liga games for his side, keeping two clean sheets in the process.

Fernandez’s save per game which is 1.4 stands to be 52% of the shots he faces per match. His reflexes is of good quality and the Madrid attackers would need to be at their best to go past him.

The former Malaga and Everton forward joined Huesca this summer on a free transfer after leaving the Toffees. He has scored once in the games for the club, with the goal coming in his first game for them.

He is a very direct forward with good pace and footworks, which means the backline of Raphael Varane and Sergio Ramos have a lot of running to do to keep him at bay.

The forward is on loan from Premier League side Wolverhampton Wanderers having joined in the January transfer window. Mir was involved in 10 goals in 18 games for the Oscenses in the Segunda division last term and has carried his impressive for to the top flight, where he has already scored twice so far. The game against Madrid will be his biggest test yet and he will look to deliver once again for his side.

The young Spaniard has been one of the positives in Huesca’s season so far. Despite his side’s poor run of form, the right-back has put in impressive efforts to attract some plaudits and already has one goal to his name. His offensive abilities are regarded as one of the best in the league but he will also need to be wary of the threat Madrid will pose on his flank.