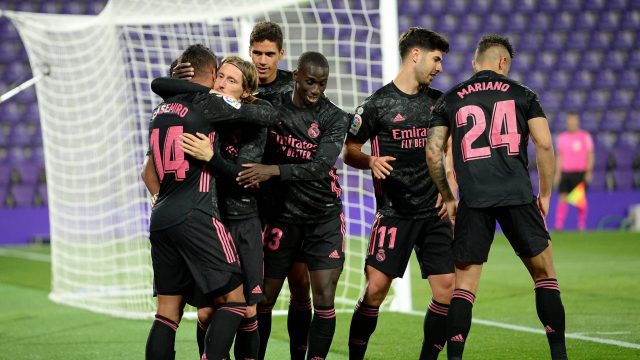 Real Madrid minimised the gap between themselves and Atletico Madrid on Saturday following their win over Real Valladolid at the Jose Zorilla.

Casemiro scored the only goal of the game in the 65th minute, heading past Jordi Masip Toni Kroos’ cross from a set-piece.

Zinedine Zidane made changes to the starting lineup that defeated Valencia a week ago in the league, with Lucas Vazquez and Mariano Diaz coming in for the injured Daniel Carvajal and Karim Benzema.

Madrid, despite making space for four shots failed to locate any of them on target and continued to dominate possession as well.

The home side threatened the most in the opening half of the game, forcing Thibaut Courtois to make excellent saves from six shots before half time break.

After the recess, Los Blancos continued to press for the opening goal and were rewarded 20 minutes later when Casemiro powered them in front from a Kroos’ free-kick.

The goal was Brazil international’s fifth league goal of the 2020/21 La Liga campaign while Kroos’ assist means he has now provided five assists in his last five games, four more than his first 16 games in the league.

Real Madrid are now just three points drawing level with neighbours Atletico, who were beaten by Levante earlier in the day.