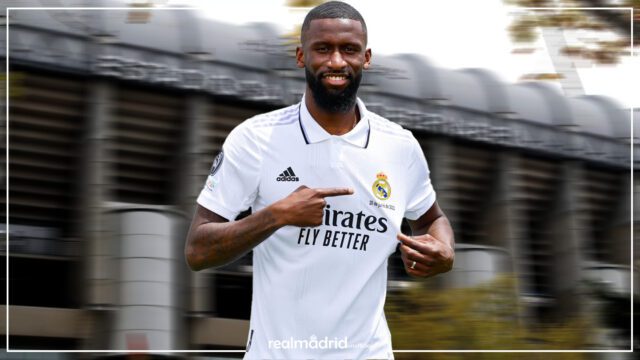 Unless you’ve been switching off from football over the summer months, you’ll be fully aware that Real Madrid finally secured the signing of long-term target Antonio Rudiger from Chelsea. Snapped up alongside the highly promising Aurelian Tchouameni from Monaco, the pair’s arrival has certainly elevated Carlo Ancelotti’s squad further. In the case of Antonio Rudiger, it’s a signing that ticks all the boxes.

Chelsea fans were devastated to lose the commanding centre-back, a much-loved figure at the club and a presence who was widely regarded as a key cog in Chelsea’s wheel, particularly when it came to winning the Champions League in 2021. For Rudiger, though, the opportunity for a fresh challenge at the biggest club on the planet was tough to turn down. As a result, Madrid fans are excited to see what the season holds for the giant German, particularly given the impact that he made at his former club. Alongside his evident ability, though, what exactly does Antonio Rudiger bring to Real Madrid? Is the former Roma player capable of delivering further success at the club?

One of the most notable features of Antonio Rudiger’s game is his passion and commitment to the cause. A commanding presence at the heart of Chelsea’s backline, his organisation led the Blues to become one of the most resolute backlines in the Premier League over the years, particularly during Thomas Tuchel’s first campaign that resulted in the club beating Manchester City in the Champions League final. The type of signing that can influence other players to join a club and fans to alter any football betting odds preseason, his absence will almost certainly be felt at Chelsea this season. The Blues’ loss is most definitely Real Madrid’s gain, with the Madrid new-boy expected to form a solid partnership with Eder Militao, although David Alaba could also be an option. Whatever pairing Carlo Ancelotti decides to move forward with will almost certainly contain Rudiger, especially after the club pushed so hard to get their man. Given his desire to move to Madrid and embark on a new adventure in the Spanish capital, Antonio Rudiger is clearly up for the challenge. For the clubs’ competition, a hungry Antonio Rudiger is a daunting prospect, largely because he has the passion to inspire those around him and lead Real Madrid into a bright future.

Madridistas will love him

Performances certainly matter more than anything else, especially at a club with such high demands like Real Madrid, but Rudiger’s passion and determination when playing the game is the type of enthusiasm that fans love to see. A player who always gives his all and will never shy away from a tackle, Rudiger puts bums on seats and creates excitement in a stadium. There were times, for instance, when Chelsea’s performances had stagnated at times and there was a lull in the crowd. All it took to wake them up was a strong challenge from the big Germany international, followed by a passionate fist pump, and the stadium was bouncing once again. He’s the type of professional who thrives in adversity, bringing the best out of those around him and uniting fans in a way that many other players simply can’t. While Antonio Rudiger’s game isn’t faultless, his mentality is rare, particularly these days. With that in mind, it’s clear why both the clubs’ hierarchy and Carlo Ancelotti were so keen on securing his services.

One criticism of the Real Madrid side in recent years has been at the back, with the team conceding a number of sloppy goals. As such, the arrival of Antonio Rudiger makes a great deal of sense. Should he form a solid partnership with those around him, then Real Madrid will be far stronger. Ancelotti’s troops are certainly in good shape heading into the season.