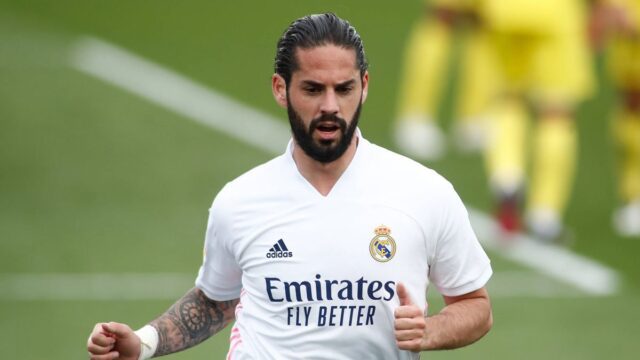 Italian outfit AC Milan is reportedly interested in the services of Real Madrid midfielder Isco ahead of the start of the 2021/22, according to reports in Italy.

The Serie A side is hopeful their good relationship with Madrid as well as Carlo Ancelotti could play a part in signing the player in the summer transfer window.

Both clubs have been in a good relationship lately due to the transfer of players in the last few years. Theo Hernandez and Brahim Diaz are examples that one could cite with regards to the topic being discussed while Milan have also held conversations for players such as Luka Jovic and Alvaro Odriozola.

After losing star man Hakan Çalhanoglu to rivals Inter on a free transfer, Milan’s management are on the market for a creative replacement and sees Isco as one who could fill the void left by Turkey International at the San Siro.

Isco was given few chances under the second spell of Zinedine Zidane as manager of the club, with the player’s poor run of form and injuries playing a part in his little games.

His contract at the club is set to expire at the end of next season and the Los Blancos are willing to part ways with the player this summer before losing him on a free next year.

The 29-year-old who was a significant buy in his first few years at the Santiago Bernabeu continues to lose grip of his importance at the club and while he is not guaranteed a place in the team for next season, head coach Ancelotti is reportedly willing to give his okay for his departure this summer.

AC Milan is not the only club after the signature of the Spain international. Sevilla, as well as clubs from England, have also enquired about his availability though Madrid is looking to coup about 20 million euros from his sale.