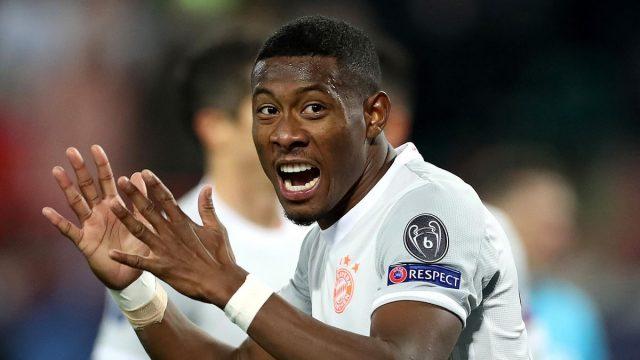 According to emerging reports, Bayern Munich defender David Alaba is said to be interested in a move to Real Madrid.

The 28-year-old is said to be stalling on signing a new contract at the Allianz Arena after several months of negotiations and the German club are said to have withdrawn their offer on the table.

Meaning, the player is likely to leave the Bavarian club next summer on a free transfer, which has derived the interest of many clubs.

The Austria international is permitted to sign a pre-contract with another club on January 1, 2021 with a host of clubs said to be keen on adding him to their squad.

Per reports in the German press, the likes of Chelsea, Manchester City, Juventus and Paris Saint-Germain have all shown concrete interest in the defender, however Alaba reportedly has his heart set on a move to one of either Barcelona or Real Madrid.

Chelsea approached the player during the summer transfer window in a bid to convince him to join Frank Lampard’s men but the experienced left-back declined the option to leave the club after winning the UEFA Champions League last season.

Liverpool are another Premier League who have also been linked with Alaba following the injury to first-choice centre-back Virgil van Dijk in the Merseyside derby this term.

Considering Real’s defensive options are quite limited this season, adding Alaba to the squad will be a great coup for Zinedine Zidane’s side.

Alaba is capable of playing as a left-back, centre-back or even as central midfielder sometimes. He grown with a lot of experience over the last years.

And considering he had just little under a year left until his contract with Bayern ends, the Los Blancos could decide to poach him for a significantly lower fee in January or wait until the summer to bring him in as a free agent.

The Bundesliga side have already confirmed that their latest offer made to the last week was rejected while also confirming they do not have an offer on the table any longer.

“We have a new situation since this weekend,” the club president said on BR Blickpunkt Sport on Sunday. “We submitted to David and his advisor some time ago what we think was a very good offer.

“During the last meeting we had said we wanted clarity by the end of October. We did not hear anything until yesterday and we contacted his advisor.

“The answer was that the offer was still unsatisfactory and we should think about it again. We then decided to take the offer completely off the table. This means there is no longer an offer.”