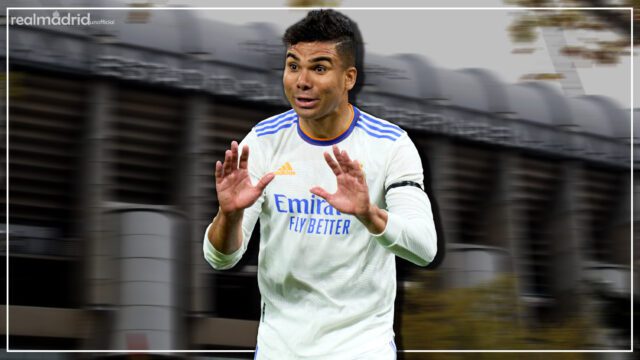 English Premier League side, Manchester United, have identified Casemiro as a dream midfield target after pulling out of the race to sign Adrien Rabiot.

Adrien Rabiot’s camp told Juventus they have no intention to reduce the salary requests – no way for Man United deal. 🚨 #MUFC

Manchester United now working on conditions of Casemiro deal, also Carlo Ancelotti will be key factor in the conversations with the player.

Man United have endured a poor start to the 2022/23 season after suffering back-to-back defeats to Brighton & Hove Albion and Brentford.

The Red Devils were keen on signing Frenkie de Jong from Barcelona but that deal looks far from being a possibility with the club now turning attention to the Real Madrid player.

According to several Spanish reports, United are keen on the Brazilian and feels an offer of 80 million euros will be enough to price the player away from the Santiago Bernabeu.

Since returning from his loan spell at Porto, Casemiro has been an integral part of Real Madrid’s team, forming a formidable midfield partnership with Luka Modric and Toni Kroos.

Though Real Madrid are not willing to go off one of their key players, United’s offer may be too tempting not to listen while the decision will also be that of the player to make.

Casemiro is a mainstay for the Brazil national team and has five Champions League victories with Real Madrid. Manchester United, who currently sits at the bottom in the Premier League, will play a season in the Europa League.

United have had a disastrous transfer window this summer despite signing three players.

John Murtogh is looking to end the window on a high and has reportedly targeted Casemiro to bring in the needed experience.

With the arrival of Aurelien Tchouameni and Eduardo Camavinga, Carlo Ancelotti will likely not be in the way of the Brazilian should he decided not to leave Santiago Bernabeu.

Was Casemiro a panic buy by Manchester United?