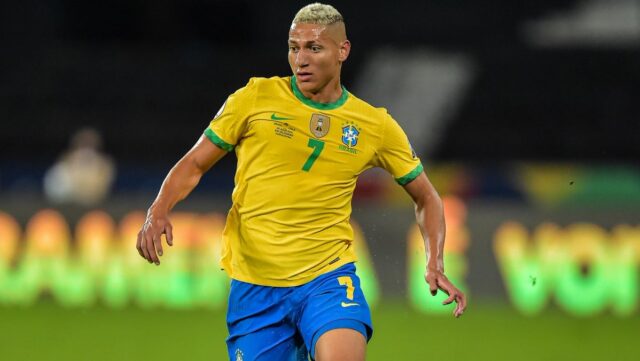 Real Madrid could be eyeing a move for Everton forward Richarlison in the summer transfer window according to widespread reports.

Per the English media, Carlo Ancelotti is a huge fan of the Brazil international and will be interested in bringing him to the Santiago Bernabeu.

There has also been speculations the former Paris Saint-Germain reached out to Richarlison over the possibility of a potential transfer to Madrid.

Ancelotti left Everton last month after receiving an offer from Florentino Perez to be in the dugouts at the Santiago Bernabeu, signing a three-year deal with the club.

And having worked with Richarlison during his time at Goodison Park, the manager looks to have been impressed with the versatile forward and seems to have held conversations with the Brazilian over switching to the Spanish capital.

Though any talks of interest from Madrid are in the early stage, it is believed that a deal for the player will cost Madrid a fee in the region of 55 million euros.

Richarlison has been with the Merseyside club since 2018 after a standout season with Premier League newcomers Watford. He played two seasons under Ancelotti at Everton, scoring 15 goals across all competitions in the Italian’s maiden campaign with the Toffees during the 2019/20 season.

The player also netted 13 times during the 2020/21 season, taking his tally under Ancelotti to 28 goals in two seasons. There is no doubt the player has seen an improvement in the last two years, which could also be credited to the management of the Italian.

Richarlison is currently on international duty with Brazil in the 2021 Copa America, where he has been involved in two goals in six games for Tite’s men.

With Brazil booking their place in the final to be played against Argentina, the Everton man will also be hoping to shine in the last game of the tournament.

Carlo Ancelotti: Real Madrid is a special place for me