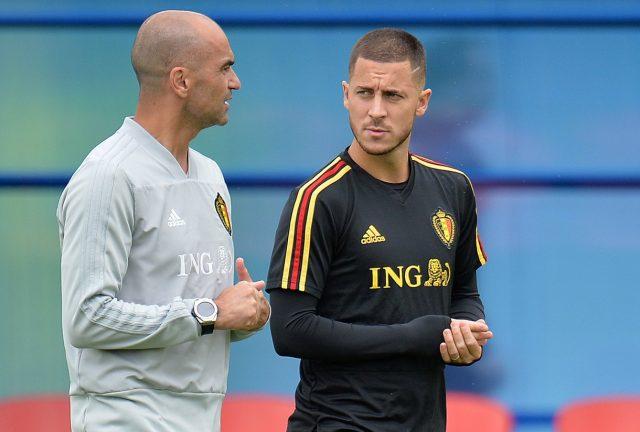 Real Madrid duo Thibaut Courtois and Eden Hazard have been named in the latest Belgium squad for their next set of international matches.

Belgium coach Roberto Martinez revealed his squad on Friday and in doing so spoke to the media about quite a number of pressing issues.

Hazard only returned from injury not too long ago, with the three Madrid games being his only appearances this campaign with just two starts under his belt.

The gaffer asked the media to be patient with the Madrid winger considering he has just return from a long injury lay off and is now beginning to settle into the 2020/21 campaign.

“Hazard has been a positive after his return to the pitch, he’s already played three games for Madrid and his feelings have been very good, I hope that he keeps making progress and getting minutes so that we can welcome him,” said Martinez.

“Again, it’s been very positive seeing how he’s moved on the pitch, he can play without pain and he proved it. He scored a great goal after his return and made an impact against Inter. We have to be patient and reasonable in order to protect him, but he’s physically good and ready to enjoy playing football.”

Courtois has been one of the very leading positives in the Spanish team’s performances this season and Martinez was delighted to see such output from his goalkeeper.

“For me and every single Belgian person he’s the world’s greatest. We enjoy his role. It’s not only about keeping a clean sheet, he shows up and performs at a high level in crucial times, every game. He’s reached a very high level and we hope to see more of the same during the games this November,” concluded Martinez.

The Red Devils are expected to face Switzerland in a friendly game on Wednesday before back to back UEFA Nations League games against England and Denmark respectively.

Everyone at Madrid will be keeping a keen eye on both Courtois and Hazard especially the latter with the hope that he sustains no injury during the FIFA break.