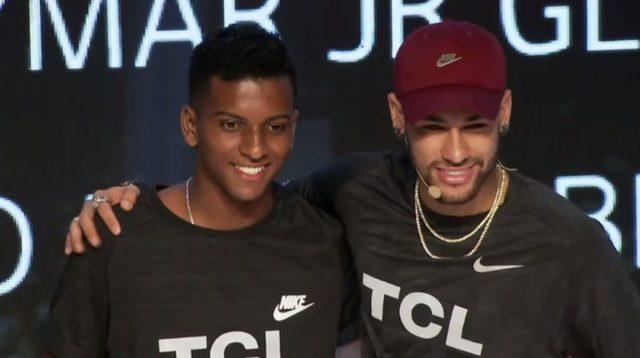 Real Madrid youngster Rodrygo Goes has ruled out the expectations of people for him to become the “new Neymar” and has insisted he wants to write his own history.

The Brazil international is one of the most promising young players who arrived at the Santiago Bernabeu and has been in the news since his hat-trick in the UEFA Champions League last season.

On a number of occasions, the 19-year-old has been likened to Neymar with others also raising comparisons with former Madrid poster boy Robinho, who both thrived at Santos before moving to Europe.

However, the Rodrygo seem not comfortable with the burden of him become the two players mentioned above. He told reporters on Monday night: “From the beginning of my career when I started at Santos, they already compared me as the ‘new Neymar’ and with Robinho, I always had that weight over me.

“I always said that I wanted to be Rodrygo and make my story, Robinho and Neymar are great idols of Santos and of all the places where they played. I’m just starting out and I think there is only one Neymar.”

The teenager has represented Brazil on three occasions with his latest coming in the 5-0 win over Bolivia on Friday and is also likely to feature in Tuesday’s encounter with Peru.

Rodrygo was one of the best performers for Zinedine Zidane’s team at some point of the 2019/20 campaign, making 19 appearances in the league and 26 across all competitions as Madrid won the Spanish league title.

He has already made two appearances this season and is hopeful of getting more chances despite admitting there is a lot of competition in his position.

“I think it is very important to have a good level, we all know that we have excellent players in my position,” he said. “It is very important that when it is my turn to play I do well and do what what Tite asks of me in training and before each game.

“It is important that I have continuity in my work to continue being summoned in the national team.”