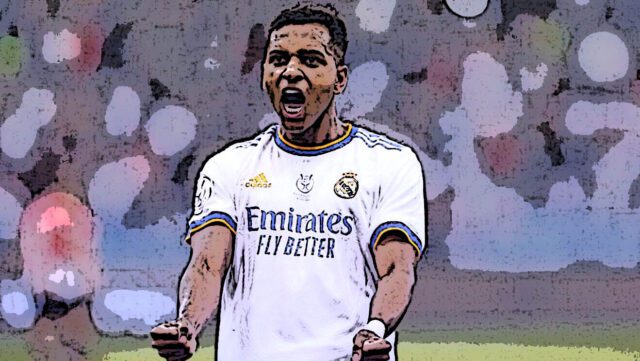 Real Madrid’s 2021/22 season was looking bleak as the knockout from the Champions League seemed imminent. With Benzema there to bail out games in and out, no other player looked with great finishing lately. But, on the occasion rose Rodrygo Goes, the 21-year-old Brazilian.

One of the most undervalued performers for the club this season and one of the most undervalued in the market as well, both the titles go to Rodrygo. He starts off at the right-wing, but with his average performances, the Brazilian couldn’t really gel his place early in the season as Asensio often started in that position. And even when Asensio got out of the picture after failing to gain Ancelotti’s trust, Valverde’s spirit and unbelievable performances held him at bay. The Uruguayan was preferred to be one of the three of the 4-3-3.

Fede despite his runs and giving in everything, he could only do so much in his unnatural position. And as the Royal Whites were down 0-1 to PSG in the second half, things started to change. Cometh the trouble cometh the super sub, Rodrygo, rising up to the occasion in his favourite situation in recent games, especially in the UCL.

Rodrygo has 8 goals and 9 assists so far in this season, having played 2213 minutes in total across all competitions. And of these, 5 goals and 2 assists came off in just 504 minutes of the UCL matches, rightfully earning him the tag of Mr UCL by plenty of fans on social media.

With La Liga nearly settled, the Los Blancos eyed the premier European competition and chose to fight against the odds. And so did they. In all of the knockout games, Real made epic comebacks, far beyond any other club’s imagination.

And that’s where Rodrygo’s most notable contributions started to pour, in the most decisive and needy times for Real Madrid. With a pivotal touch against PSG to contribute to Benzema’s third goal in the home leg, Rodrygo became a super-sub from then on. Teams started to fear and damn right they should.

In the returning leg against Chelsea, he scored a spectacular volley in the 80th minute, which was overshadowed by Luka Modric’s assist of the century. This started off a comeback as Benzema scored another goal to settle the tie and Real proceeded.

On came the mountain high challenge of Manchester city in the semi-finals. Things started to come to an end for the Los Blancos and would’ve been over minutes ago for any other team in the world. But Real rose from the smallest of spark. Rodrygo’s two consecutive goals, one in the 90th and the other in 90+1, electrified the Bernabeu and announced in every Madridista’s heart that we are going to Paris for the 14th crown.

And these aren’t the only instances of his magic. The La Liga performances against Sevilla and Espanyol, 2 goals and an assist, have been sidelined.

It’s clear how precious our young star is. Having already implemented and seeped the elite mentality required and found at the club, Rodrygo shall not be allowed to be touched by the other teams.