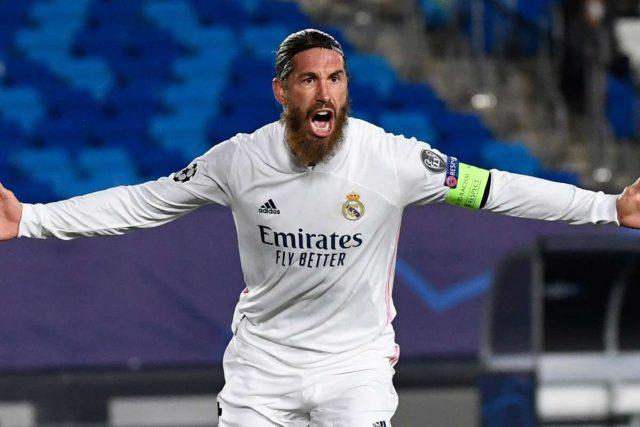 Sergio Ramos’ important for Real Madrid once again was seen in their Champions League win over Inter Milan on Tuesday.

With his powerful header to connect with Toni Kroos’ cross on the 33rd minute, the defender doubled his side’s lead but the emphasis was the fact that the goal was Ramos’ 100th in a Real Madrid shirt.

Yes – 100 goals across all competitions for the Spanish giants since arriving from Sevilla in the summer of 2005.

The Spain international’s name is now added to an exclusive list of 19 players who have done so with the Real Madrid colours. Out of the 19 players in that exclusive club, Ramos joins Fernando Hierro as the only defenders to have reached such feat – though the latter’s goal scoring abilities were as a result of playing on several occasions as a midfielder.

Meaning the 34-year-old is the first out and out defender to reach a century of goals for the Los Blancos, doing so in his 659th game for them.

Having joined Madrid in August 2005, the Spaniard scored his first goal for the club against Greece outfit Olympiacos on December 6, 2005 – heading home a free kick from Raul Bravo in the Champions League.

Ramos has already opened his scoring account this season, which means that he has scored for the club in every single season since making the move to the Santiago Bernabeu.

However, the highest he has finished with in a season was 13, which came during the 2019/20 season where he became a regular penalty taker for Zinedine Zidane’s team.

Considering his scoring habit, Ramos has shown several times that he deserves to be given a new contract at the club considering his current deal expires in 2021.

Sergio Ramos out for weeks with knee injury