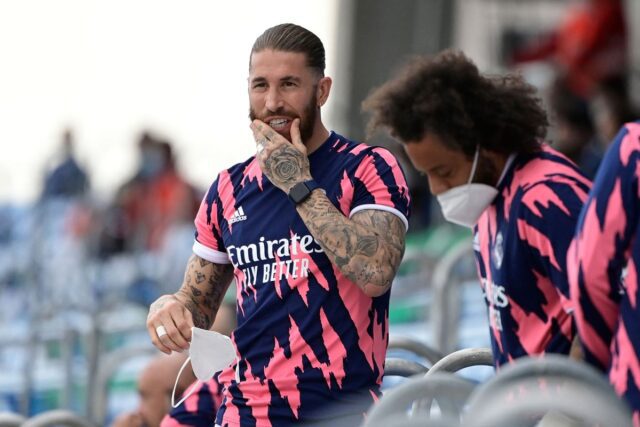 The relationship between Sergio Ramos and Real Madrid could be heading to an end after the defender did not appear in the launch of the Real Madrid new home kit for the 2021/22 season.

Sergio Ramos has over the years been the leading man for the kit launch, however, he was not featured in any of the visuals that were released by the club for any of the kits.

Though no one knows the rationale behind the omission or the absence of the club captain at the launch on Tuesday, there are suggestions it may be due to his current contractual talks with the club.

Another clue could be that the photoshoot was taken at a period where the Spaniard was not available, with his isolation period a clear example.

Ramos’ contract is set to expire at the end of this month and the club, as well as the player, are far from reaching an agreement to extend his deal at the Santiago Bernabeu.

His situation could also be likened to that of Cristiano Ronaldo in 2018, where the Portugal international’s absence from the photoshoot was a clear indication of his departure from the club to Juventus despite some viewing absence as a mere anecdote.

Whatever the case is, the absence of Ramos could be a clue that he may not stay at the club after all.

The player is being wanted by Paris Saint-Germain while Manchester City are also said to be keeping an eye on his situation.