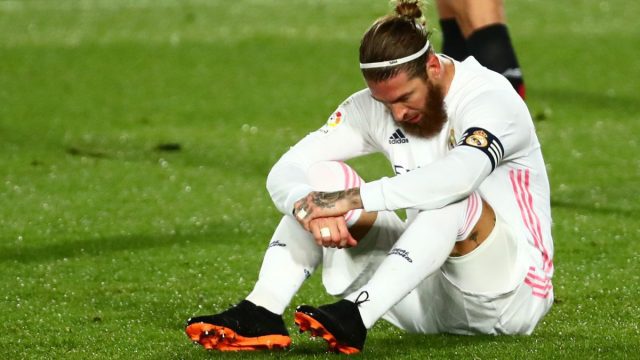 Real Madrid has confirmed Sergio Ramos is expected to be out for a number of weeks with a knee injury.

The player underwent knee surgery earlier in the day and will now miss close to seven weeks as he tries to recover and continue his rehabilitation.

Ramos has missed Real Madrid’s last four games because of this injury, including the win over SD Huesca on Saturday, which saw defensive partner Raphael Varane steal the show.

A statement on Madrid’s official website read: Our captain, Sergio Ramos, successfully underwent an operation today for the injury to the internal meniscus of his left knee. The operation was performed by Dr Manuel Leyes under the supervision of the Real Madrid medical department. Ramos will begin his recovery in the coming days.

Sergio Ramos is still stalling on a contract extension at the Santiago Bernabeu with his current deal coming to an end at the end of the 2020/21 campaign.

A return to the pitch for the captain is what everyone is hopeful for as it could help decide his future at the Spanish capital.